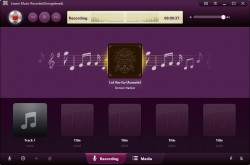 [1]When combined with a video converter [2] that can extract audio from videos, it is very easy to grab the audio track off an online video that is downloadable by a video downloader program [3] — videos on websites such as YouTube and Dailymotion. However, sometimes it isn’t possible to download videos and thus you can’t extract audio from those videos. Or maybe you aren’t trying to extract audio from videos but rather record radio stations, podcasts, music, etc. In situations like these, you need an audio recorder [4]. Leawo Music Recorder is one such audio recorder. Let’s see if it is worth your time.

Leawo Music Recorder lets you record audio from that you would normally hear from your speakers (aka loopback audio) and audio from your microphone.

Do take note you need to have an audio sound card that supports recording of loopback audio (almost all modern sound cards support this, so your computer likely supports it if it isn’t too old) and need a mic to record audio from microphone, but if you fulfil those requirements then Leawo Music Recorder will record any and all audio for you. 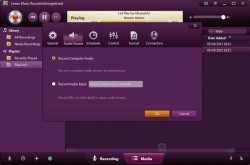 This behavior of Leawo Music Recorder is extremely useful if recording audio from different sources one after another and wanting each source to be stored in its own file but can be annoying if you are looking to record only one audio source.

Not one to give up, I went back and tested my original task scheduler theory that it is intended to allow Leawo Music Recorder to automatically start itself and record at a specific date/time (minus the date, of course, since there is no setting to set the date). It does appear that this is what the task scheduler is for (because you can’t set the Start Time higher than 23:59:59) but the feature doesn’t appear to work. I set the task scheduler’s Start Time five minutes into the future and waited to see if it would automatically start recording. It didn’t, so either I’m doing it wrong due to how confusing this feature is or the feature is buggy.