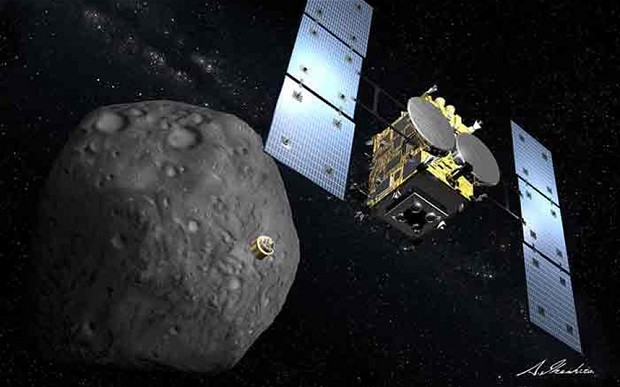 Wanting to know where we come from, whether it be simply listening to our grandparents telling tales of our more recent heritage, or researchers studying the origins of our evolution, the need to know seems to be an integral part of human nature.

Japan has recently taken further steps in this direction, though they’ve aimed their expectations a little higher with the Hayabusa-2, which is a probe they will be launching in 2014. The goal of this probe is to meet up with 1999JU3, which is an asteroid which floats somewhere in the middle of Earth’s and Mars’ orbits.

When Hayabusa-2 gets close to 1999JU3, it will launch essentially what is a bullet that weighs 4lb towards the asteroid. Hayabusa-2 will also descend close to the impact point to study it. According to the Japan Aerospace Exploration Agency (JAXA), “an artificial crater that can be created by the device is expected to be a small one, a few meters in diameter, but … by acquiring samples from the surface that is exposed by the collision, we can get fresh samples that are less weathered by the space environment or heat.”

Aside from the pure research side of things, JAXA hopes their studies will also have practical applications. “It can provide important information needed to develop strategies to protect the Earth from potential hazards. Moreover robotic sampling missions to primitive bodies will be pathfinders for human missions that might use asteroid resources to facilitate human exploration and the development of space.”

Folks, I believe my dreams of a space cannon have come true.