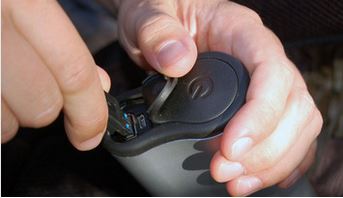 Forget to plug in your smartphone or tablet? You’re dead in the water then. Or are you? If you have a Genneo charger you might not be so out of luck. The Genneo [2] charger uses movement to power your device, charging it even when you aren’t near an outlet.

No, you can’t sit still and read your latest Facebook posting. The Genneo charger uses the standard USB port found on your device and turns your movement (e.g. walking, running, etc.) into power for the device.

If this sounds a little odd, then you’ve probably never used a “shaker” flashlight. These flashlights utilize the same basic technology of linear movement to power the flashlight instead of a typical battery. While the underlying technology is the same, Genneo sought to improve on the technology by making it more efficient (i.e. generate more power per less movement) and a better design for ease of use; simply plug your phone or tablet into it, put them both in your pocket and go for a walk. Your phone or tablet will charge in your pocket as you get in some exercise.

This plug free generator isn’t going to replace your power outlet, however. Right now the G4000 model provides you with an hour of talk time per five hours of charge time; that’s a lot of movement for just an hour of talk… and this number will vary from device to dev. The good thing is that the movement doesn’t have to be extreme. You don’t have to go jogging or do a bunch of jumping jacks, walking will do the trick. You can also shake the waterproof generator to help it charge quicker, but is Facebook really worth all that work? I doubt it.