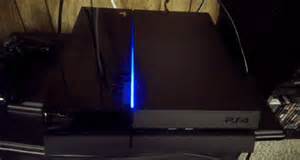 Sony has asserted officially that only 1 percent of the consoles have the “Blue Light of Death error”, which makes it a total of roughly 10000 consoles, given 1 million PS4 sales on the first day of release. According to Sony, the “Blue Light of Death error” could be the result of various other problems, which it says are not all related to PS4 hardware. Sony further claims that many consoles were damaged during shipment and that it has much PS4 hardware to replace the damaged PS4 units. The error usually pops up when people start the PS4, with some units not even making it to the home screen, leaving the users to just stare blankly at a long strip of blue light. For a quick solution, Sony has also released a trouble shooting guide for fixing the error, but the guide has helped a few people.

People who have had any type of bad experiences with PS4 have taken to the internet to register their voice. For the current dilemma Sony has said the following:

“We also understand that some units were reportedly damaged during shipping. The number of affected PS4 systems is less than 1 percent, which represents a very small percentage of total units shipped to date and is within the expected range for a new product introduction. We understand the frustration of consumers that have had a problem and are working with them and our retail partners to help troubleshoot issues and ensure affected units are exchanged.”

What is worth waiting for is to see whether Xbox One sports any such error like its predecessor, Xbox 360, and if it does not, it will surely take the lead in the hearts of hardcore gamers.