Anti-piracy campaigns are not new to us netizens. In fact, I know a lot of geeks who are dedicated to fighting this Internet crime. For example, one of the biggest targets today is The Pirate Bay [2]. It has a lot of enemies but I honestly doubt you can take Pirate Bay down–at least not yet.

Nowadays, it’s easy to say you are anti-something. You’re anti-this, anti-that. If you agree with anti-piracy, it may not be as easy because people will watch your every move since it is such a controversial topic. Just recently, we learned of BSA’s use of an unlicensed photo it one of its campaign ads [3].

A similar thing happened to the Southern African Federation Against Copyright Theft (SAFACT). The anti-piracy group, ironically, used unlicensed photos and copied words from another site. The group is clearly against The Pirate Bay but unfortunately, a press release about their campaign was taken from another news website. Looks like some employees don’t agree with organizational philosophy. 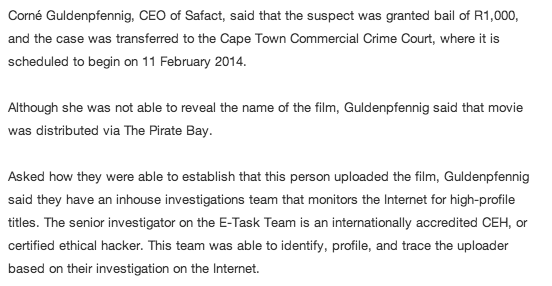 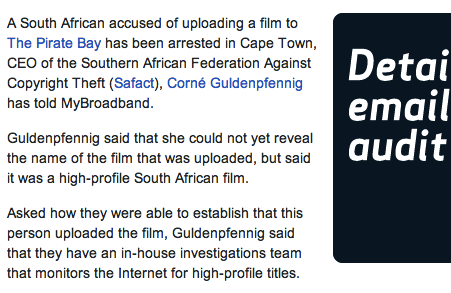 Yikes. The similarities are very obvious. SAFACT didn’t even have the decency to rewrite the third paragraph. The SAFACT text and the original article are still both viewable.

Aside from this issue, another photo-related stealing was noted by HTXT.africa: 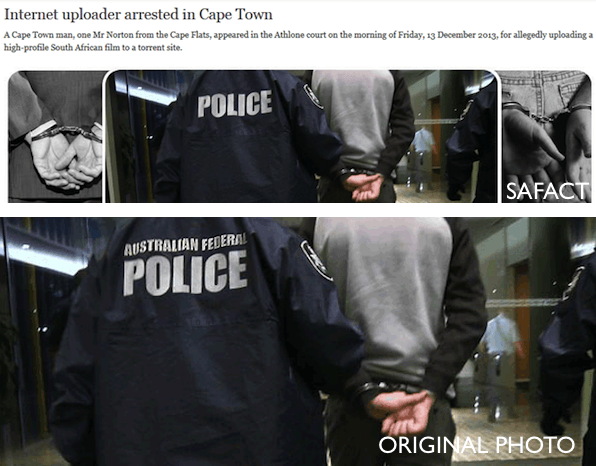 The first photo has since been taken down from the SAFACT page. The original source is not really a photo but was actually a screenshot from an old video [4] shown on The Guardian [4], with the print ‘AUSTRALIAN FEDERAL’ photoshopped.

Don’t these people know plagiarism is another form of piracy? Anti-piracy may technically be focused on copyright theft but copying another person’s work is stealing. It’s that simple.

For what it is worth, SAFACT’s page now shows a note that says, *( Image removed due to inconsistency of content of article ). I ask: what inconsistency?! Looks like plain hypocrisy to me.