Lots of open app windows reduce the amount of space on your taskbar. Instead of closing the app windows, you can temporarily remove them with various software packages. Among those packages is Magic Boss Key, a software which enables you to remove active windows from the taskbar with a hotkey.

To begin, just open the publisher’s website [1] and press the Download Now button to save the setup wizard. Then install the software with the setup wizard, and open the window in the shot below. The program is compatible with the Windows XP, Vista and 7 platforms. 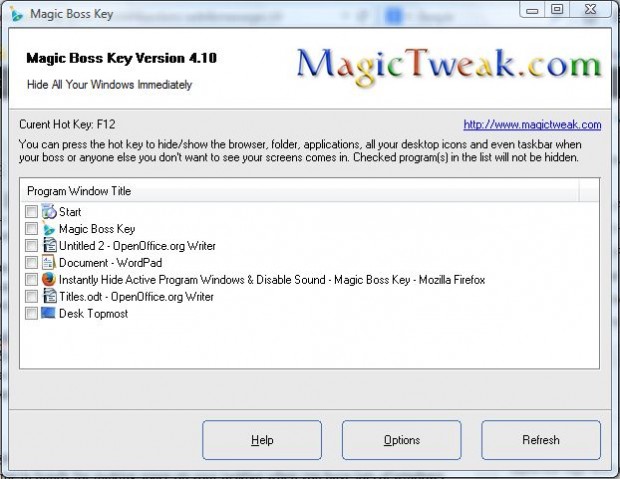 Next, open a few windows and press the Refresh button. Magic Boss Key lists all your open windows as in the shot above. Now press F12 to remove all the active windows from the taskbar! Press F12 again to restore the active windows.

To keep a few windows on the taskbar, you should select their check boxes on the Magic Boss Key window. The software removes all the windows from the taskbar that aren’t selected. Then press the hotkey to remove those windows.

You can also hide the taskbar with Magic Boss Key. Press the Options button to open the window below. There you can select an Enable Boss Key to Hide Taskbar option among others. Click on that check box and press OK to close the Options window. Then when you press F12 the taskbar also disappears from your desktop. Press the key a second time to bring the taskbar back. 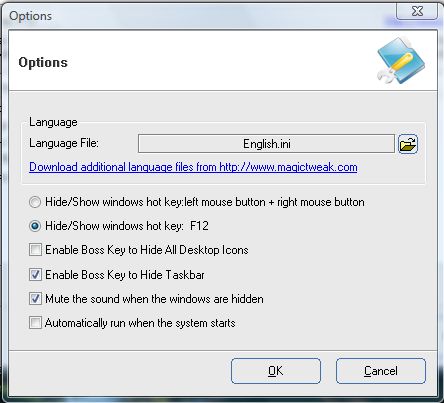 So with this application you can now quickly remove all your active windows from the taskbar by pressing a hotkey. That should come in handy for making space on your taskbar when you have lots of windows open.