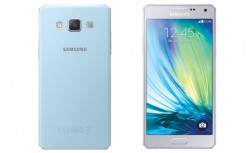 [1]The Samsung Galaxy A5 is one of our favorite smartphones in the Sammy range since they released the current S5 flagship. It’s not always about what has the highest specs, sometimes a device just feels great in the hand. What’s more, you’ll struggle finding a prettier press render than the shots that come along with this A-Series. The “5” marks the middle phone in the range. There’s still one that’s more expensive and likely ahead of this handset when it comes to future software updates for that reason. Check out why that’s relevant after the jump.

The new Android 5.0 Lollipop update is rolling out over the air for a bunch of different handsets. The Sammy S5 is one of those. Google and Android always look after their own devices first and then roll the updates out to the manufacturers how they prefer them. That usually means the more expensive devices finding it arriving before the rest. The one exception to that is a Google Play Edition handset, or if they start rolling updates to two different devices and just about the same time (bonus for the cheaper variant!).

Anyway, if you are wanting to gain root access on your handset under the same name, you can easily do that by following Chainfire’s work below. It’s an easy method. Before starting the steps we recommend checking out the sub-headings so you don’t miss a beat.

The Samsung Galaxy A5 comes with Android 4.4.X KitKat out of the box. The current method on this page works for the KitKat software update. We do not recommend you attempt flashing the file if you have downgraded the firmware to an earlier version, or if you are running Android Lollipop at a later date.

Furthermore, there are several versions of the A5 with different model numbers. Only use this guide for the A500G model number. Check the number by navigating to the Settings, followed by About Device.

You’ll have the ports open and ready for installing a custom ROM after the device reboots. You can get further confirmation everything is working by installing the root checker application from Google Play.