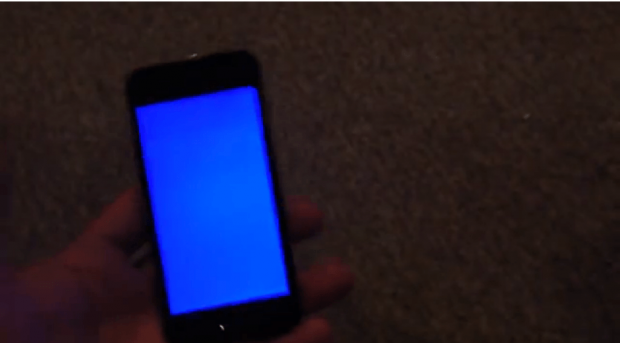 According to the Apple support forums, several iPhone 5s users are having trouble with their new handset. It apparently kicks in the Blue Screen of Death then reboots itself. Who would have thought that in the year 2013 an Apple user would experience what it feels like to be hit head on with the Blue Screen of Death, known as BSOD to Windows users.

It’s obviously a bug of some sort, but let’s be honest here, that’s not even mildly important. An Apple device giving users BSOD have got to be the greatest thing to eve happen to mankind since our ancestors first created fire. It’s also quite ironic because Apple fans usually have a go at Windows users about BSOD and other OS related and unrelated problems.

Here is what a few iPhone 5s users have to say,

“I have messing around with it more and it only seems to do this blue screen reboot thing when exiting the Numbers app by Apple.”

“How do I resolve the blue screen error while using iWork on my iPhone 5s? When I use Pages, for example, and press home button to switch app, my iPhone restarts after a blue screen.”

“My iphone 5S ( iOS 7 , 32gb) screen turns blue and reboots when I exit the Numbers app made by Apple. Other people seem to be having this problem as we’ll.”

Apple recently released iOS 7.0.2 to fix lock screen security problems. However, if you’re hoping it will fix your BSOD problem, you’re out of luck pal. The only thing users can do at this sad moment in time is wait until Apple releases another update.