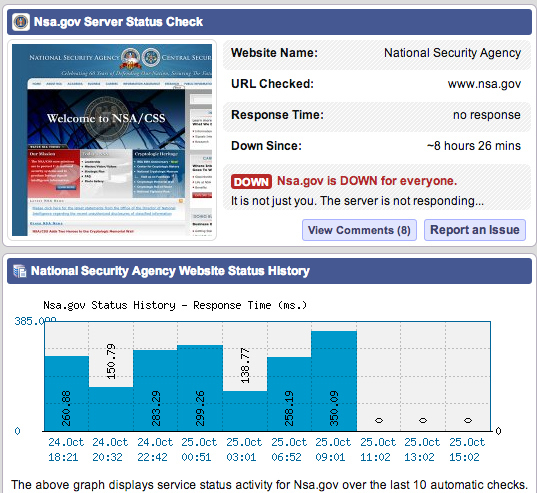 The website for U.S. National Security Agency (NSA), an institution now at the center of a huge international scandal for its espionage activities, was inaccessible Friday night, according to an agency spokesman. NSA is trying to identify the causes of this incident, Vanee Vines assured, without providing further details, and the website was accessible again after a few hours.

Speculation, of course, hit the web about what happened and why. Among other things, according to some users, the site had been attacked by the hacker organization Anonymous, whose members are known for such actions. Meanwhile, the Huffington Post announced that the website was down due to a DDoS attack and responsibility was claimed by the Rust League group on their Twitter account. Subsequently, the group said that the operation was conducted with the help of one of the leaders of Anonymous organization.

On the flip side, Wall Street Journal reports the NSA site was inaccessible due to a technical failure and not an attack by hackers, citing sources inside the American agency.

The truth? As always, it is probably somewhere in the middle.