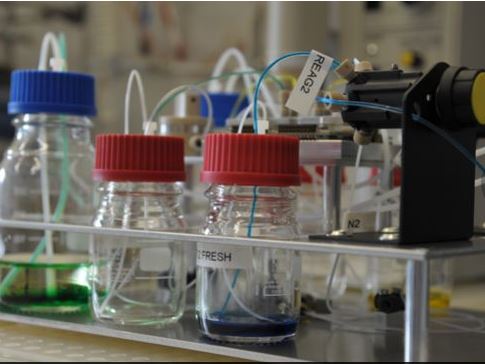 The human brain is the source of inspiration for many things. Making a computer think like a human is one way the brain has inspired scientists. Another way the brain inspires is the way that it is cooled.  The human body uses blood to cool the brain and keep it from being overheated.  Researchers at IBM are looking at that cooling method to handle the temperature problems in newer processors.

While the concept is still under development, IBM researchers, Patrick Ruch and Bruno, have developed a chip that contains tiny channels to circulate fluid. This circulation of fluid would be used to cool the electrical components inside.

Ruch and Bruno believe that they can use a solution such as an electrolyte to run through the channels, similar to what is used in batteries. This fluid will also help to pickup electrons as it circulated thorough the chip. The action would help to power the chip as well as dissipate heat.

Their new chip is still in the developmental stages. They are still fine tuning the fabrication of the chip and figuring out what electrolyte solution will work the best. Their hope is that by developing this type of chip computers can become more powerful.  Also by adding the cooling technology to computer chips, large companies can reduce their electrical costs. No need to have high powered air conditioners to cool your server rooms.

This project is the stepping stone to helping to make computers process data like a human brain. The human brain uses lots of energy to processing data without a lot of excess heat being generated.