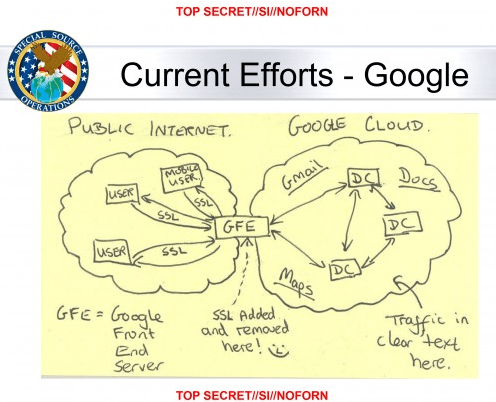 Google appears to be furious after finding out that the NSA has exploited their and Yahoo’s data centers [2].

“We are outraged at the lengths to which the government seems to have gone to intercept data from our private fiber networks, and it underscores the need for urgent reform,” David Drummond, who is the chief legal office for Google, told the Post.

The company, along with other tech giants like Facebook and Microsoft, believes that the government should not be able to have this much power, especially when it comes to monitoring them privately.

Mike Hearn, who is a Google security engineer is incensed that Google’s system has been undermined by the government.

“We designed this system to keep criminals out,” Hearn said in a written statement. “There’s no ambiguity here. The warrant system with skeptical judges, paths for appeal, and rules of evidence was built from centuries of hard won experience. When it works, it represents as good a balance as we’ve got between the need to restrain the state and the need to keep crime in check. Bypassing that system is illegal for a good reason.”

Because of these invasions of privacy, Hearn also says that new encryption is being used for Google’s data. “In the absence of working law enforcement, we therefore do what internet engineers have always done – build more secure software,” he said.

It’s interesting that there has been such a backlash from companies now that their own privacy has been compromised by the government. We realize that level and depth of NSA spying is not comparable to data collection done by the likes of Google and Facebook, but, still — they are allowed to invade our privacy and get mad when NSA returns the favor? Touche.

Oh, and by the way, you should also be mad at NSA hacking Google and Yahoo data centers… because the NSA is after your data and while you may feel it is poetic justice against these companies that are known for pushing the boundaries of online privacy, the user is ultimately the target of the NSA. In other words, me and you. If we were terrorists, of course. Wink, wink.