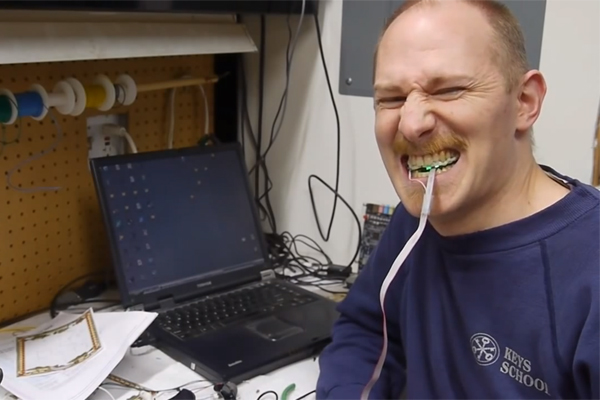 Ben Krasnow, who works at Valve as a mechanical and electrical engineer, has designed two new, interesting, and yet very unconventional controllers. One is controlled in your mouth and the other essentially by your bum.

The tongue mouse is similar to a retainer, works by biting down on it to click the mouse, and you move the cursor by using your tongue to rub it against the plastic, which has a built in sensor. The way the bum controller works is that it allows you to walk forward in a game by putting your weight on the top of the bad, go backwards by doing the same on the back of it, and also allows you to strafe by putting weight on the sides.

These controllers are still in the early phase of development and it isn’t clear if Valve will ever actually develop them. They both need a lot of work, especially the tongue controller, as Krasnow demonstrates in the first video. Still it is also very impressive that he has that much control over the mouse just by using his tongue. The future applications for an updated version of this kind of controller, whether by Valve or someone else, especially when used for those that are disabled, are incredibly interesting as well.

It isn’t especially surprising that this kind of work is going on at Valve. While they may be more famous for game series like Left 4 Dead and Half Life, they are also kind of the Willy Wonka of video games. They are generally able to keep their projects under wraps and when they come out they do tend to be incredible, and it will be fascinating to see what else they can come up with.