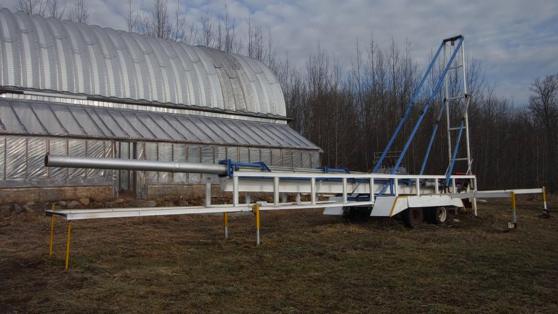 A Canadian engineer has built a “cheap” space cannon in his backyard. Richard Graf built the 45 foot cannon as a way for people to launch their own small satellites, or “cubesats”, up into orbit.

Graf sees this a good, cheap alternative to using rockets.

“Rockets have been around for a long time and they work OK. The problem with a rocket is that it has to carry not just its payload but all of its fuel, the fuel tanks, and a lot of additional equipment. That makes a rocket big, and big is expensive,” Graf writes on his Kickstarter page. “Let’s face it, barring some breakthrough in advanced physics rockets aren’t going to get much smaller or cheaper than they are now.

“On the other hand a gun launcher can fire a vehicle that is basically a payload wrapped in an aerodynamic shell. That makes them small and small is cheap!,” he added.

It’s definitely a great idea, and I admire his initiative, but I’m also amazed that the government hasn’t come in and taken his cannon away. Apparently in Canada we have more freedom. Oh yes I did.