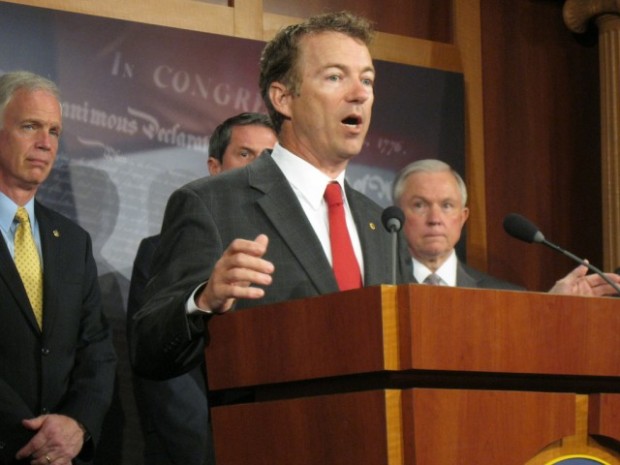 Senator Rand Paul, a Republican from Kentucky who describes himself as a “constitutional conservative” is a known libertarian, has filed a class action lawsuit against President Barack Obama, as well as others who are part of the intelligence community, over the National Security Agency (NSA) and their mass metadata collection programs.

The Senator has been joined by conservative group FreedomWorks [2], and the lawsuit has been filed on the grounds that mass metadata collection is unconstitutional, should be stopped, and all the records should be deleted.

It states in the case that:

“The type and quantum of evidence needed to satisfy the ‘reasonable articulable suspicion’ threshold to initiate a query by the NSA officials based on a seed is not publicly known. While the results to not identify the individuals or organizations associated with responsive telephone numbers, their identities (including the identities of Plaintiffs and class members) can be readily discovered outside the Mass Associated Tracking Program. When cross-checked against other public records, telephone metadata can reveal a person’s name, address, driver’s license, credit history, social security number, and other information.”

The lawsuit has been met with mixed reactions. Mark Rumold, who works for the Electronic Frontier Foundation [3] as an attorney, the lawsuit won’t do much but thinks that the statement made by having a Senator bring a case against the President may be useful at least.

“I don’t think it’s going to change much legally, but it certainly adds something atmospherically to have a senator lead a class action against the president and the intelligence community,” Rumold as to to Arstechnica. “I just hope this doesn’t distract from the great work Senator Paul has done advocating for NSA  reform in the Senate. I still think that’s where he’s uniquely positioned to make his most valuable contribution to reining in the NSA.”

Others are far more pessimistic, and believe that this won’t change anything. Fred Cate, who works at the Indiana University as a professor of law, is more in camp. Despite the fact that he agrees with the soul of the case, he doesn’t see it going anywhere.

“There is no statutory or other legal basis for a court to issue a declaratory judgment that an action violates the Fourth Amendment,” he said. “There probably should be—it would help eliminate the difficulty that Fourth Amendment wrongs are almost always raised by criminal defendants who wish a court to suppress evidence that was collected illegally—but there just isn’t at present. Moreover, a class action is hardly a likely vehicle to encourage a court to venture into new territory, because how could a court declare for a large unspecified class something about the legality of a search?”

What do you think? Is this more political epeen wagging or will this bring about real change? Let us know in the comments below [4]! As for me, I’m not holding my breath. Oh and I also have to ask the conservatives: where were your lawsuits when similar data collection was going on under the Bush era? Yeah, typical politicians — all around.