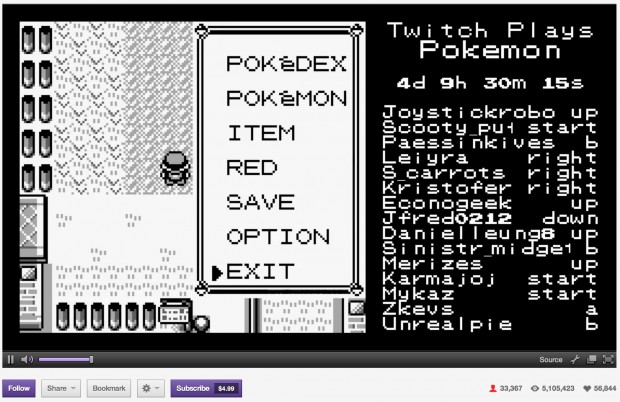 This is kind of amazing. Someone has set up a Twitch stream titled “Twitch Plays Pokemon.” And this livestream of the classic GameBoy games is different from any other because over 30,000 people are controlling the game. If that sounds crazy, that’s because it is. But miraculously, it’s actually working!

The way its set up is that the emulator takes inputs from the chat. Participants of the stream need only to type in commands like left, right, up, down, a, b and start to control the game. Throw in tens of thousands of people in there, and you can imagine that it gets pretty hectic.

Believe it or not, they’ve gotten past two gym leaders and are slowly making progress through the game. It may take excruciatingly long for them to get from one place to another sometimes, but it’s happening.

It’s a silly little experiment that’s caught the attention of the internet, and deservedly so. Now we need to see more games played like this! Check out the livestream yourself right here. [2]