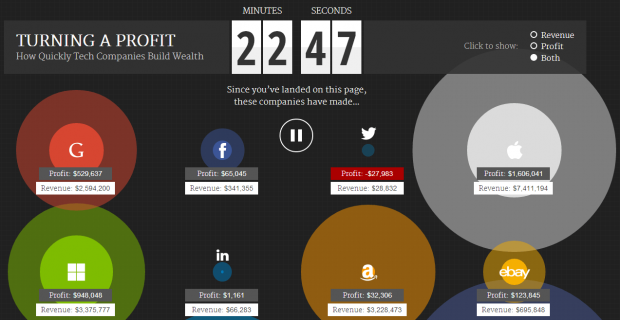 We all know Apple is a money making machine, but what if you could sit back and watch the Cupertino giant make over $300,000 in a minute, that would be cool right? Sure, it would. That’s why a bunch of guys chose to create something called WorldPay. It’s unnecessary and won’t survive long, but it is interesting nonetheless.

The website basically shows how the biggest tech related companies in the world compare in terms of profit and revenue over a period of time. For example, Apple made $4 million in revenue in 12 minutes, and nearly $900 in profit during the same time frame. Google on the other hand made little over a million in revenue and over $100,000 in profit.

Interestingly enough, Twitter is losing money. In 16 minutes, the company has lost over $20,000. If Wordpay sources are correct, things are not looking quite good for the micro social network.

We hope WorldPay adds more tech companies to the list, for it would give Fanboys something to gloat over, which would then turn the Internet into a bigger mess. I love mess, doesn’t both me at all.

Anyway, it’s very strange how the revenue and profit margins are so far apart. For those who understands the world of business, come forth and enlighten us with education.