No, this isn’t 2013 when Candy Crush Saga was the biggest app going around in mobile gaming. Yes, it is the year when Microsoft decided to have Candy Crush Saga come pre-installed in Windows 10. I was never a massive Candy Crush player myself but I can appreciate the love some people had for the app. Microsoft likes the game so much that it has decided it will let it join the historic titles such as Minesweeper, Solitaire and Hearts, and come pre-installed in Windows by default. For some that’s brilliant, for others it’s unnecessary bloatware. If you would like to remove the Crandy Crush Saga game and give your Windows computer a slight performance boost, you can do that by following the guide below.

The following guides teaches you how to remove Candy Crush Saga from Windows 10. The guide should be followed by advanced Windows users only as it requires use of the Windows PowerShell.You must only perform the actions we say during the guide while you are using the PowerShell or else you risk creating problems on your computer.

HOW TO REMOVE CANDY CRUSH SAGA FROM WINDOWS 10

1. Navigate to the Windows search field and type PowerShell.

3. Look down the screen to where it says FamilyPackageName and you should see a string of code similar to this: king.com.CandyCrushSaga_1.540.1.0_x86__khqwnzmzfus32 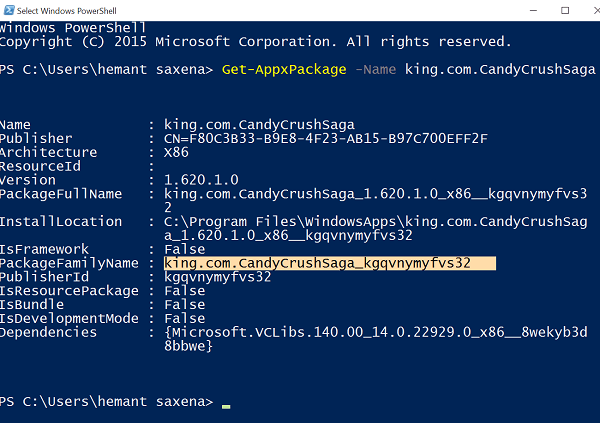 4. Copy your version of the FamilyPackageName that’s on your display from the PowerShell.

5. In a new command line, type: Remove-AppxPackage followed by the string of code you copied from the FamilyPackageName.

6. Hit the Enter key and it will confirm that command and remove the candy Crush Saga game from your windows 10 operating system.

7. You can enter the PowerShell once again and type “Get-AppxPackage -Name king.com.CandyCrushSaga”. This time it should return no results.