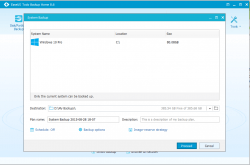 [1]Here in dotTech, we already did a review on the “best free file backup, drive backup (aka imaging), and system backup software [2]” for Windows. However, if you have yet to pick a backup program and are willing to spend some money, EaseUS Todo Backup Home wants to win your business. Anyways, let’s see if it’s truly worth spending to. 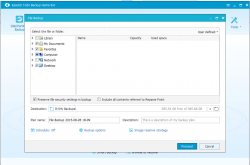 Restoring is just as easy as backing up with users having the ability to selectively restore files/folders or restore whole backups.

EaseUS allows for additional options such as:

The PreOS option is particularly interesting; it allows users to access a pre-Windows environment on the next boot of their computers allowing for recovery options to be accessed without actually booting into Windows. In other words, it runs EaseUS Todo Backup Home’s recovery options outside of Windows without you having to create bootable media. However, this is not meant to be a replacement for bootable media as it does not guarantee complete safety in the cases of boot or hard drive failure.

So, essentially, when you buy EaseUS Todo Backup Home, you are paying $29 for just a snapshot feature. Is that snapshot feature worth it? You may think so, but I say no. Rather, if you are going to spend your hard earned money purchasing a backup program, why not spend $10 more and grab Paragon Backup & Restore Home or EaseUS Todo Backup Workstation; both of these programs have that critical ability to restore backups to dissimilar hardware — for only $10 more. If you are willing to spend even more money, you can grab Acronis True Image for $50 and Macrium Reflect Pro for $59, both of which can also restore to dissimilar hardware.

So, to conclude in one sentence, EaseUS Todo Backup Home is a good program but is not worth the money because it lacks the ability to restore to dissimilar hardware. My recommendation is to either go with excellent free drive-level/system and file-level backup programs [2] or spend a little more money and grab a program that can restore to dissimilar hardware instead of spending $29 on EaseUS Todo Backup Home.