Select a row by placing the cursor within one of its table cells. Then press Shift + Alt + Down arrow to move it one row down the table. It swaps with the one directly beneath it so that the row below goes above it. 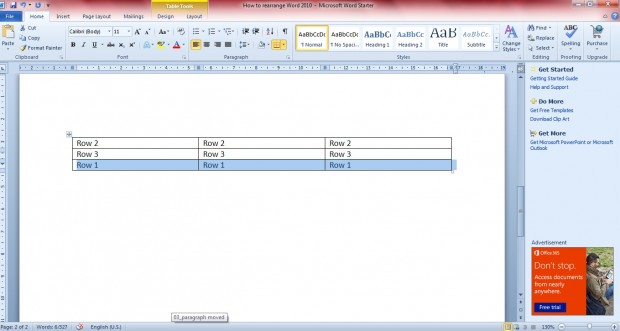 To move a row upwards, you should select a row, and then press the shortcut key Shift + Alt + Up arrow. Then it will move up one row in the table. With those shortcut keys you can reposition rows without editing the original table.

You can also move paragraphs up and down the Word 2010/13 documents. Place your cursor in the paragraph you’re going to move, and press Shift + Alt + Down arrow to move it further down the document. The paragraph swaps position with the one directly below.

Of course, you can move the paragraph further up the document much the same. Place the cursor in a paragraph, and press Shift + Alt + Up arrow to move it up the page.

In addition, the key shortcut also moves bullet points in Word  2010/13 documents. Place your cursor at the bullet point in the list you’re going to move. Then press either Shift + Alt + Up/Down arrow to move the bullet point upwards or downwards.

With this keyboard shortcut you can quickly change the position of table rows, bullet points and paragraphs in Word 2010/13 documents. It’s better than the copy and paste options!