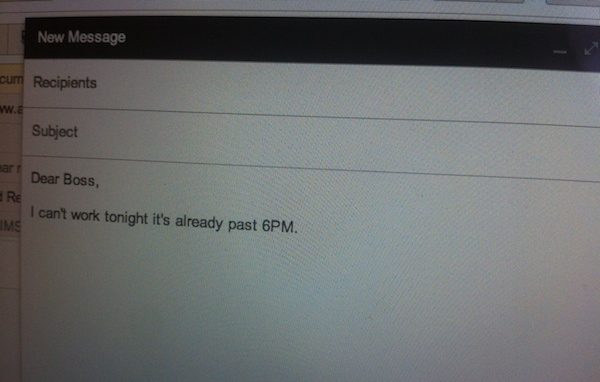 The recent ruling on a no-work-email-after-6-pm for the French caused quite a stir in the marketplace. The first report by The Guardian was clearly misunderstood. Employees are not banned to check their e-mails after 6PM but rather the agreement was to “to prevent employers from being able to pressure employees to work harder by sending emails after office hours – essentially, the digital equivalent of not receiving a phone call in the middle of dinner from your boss.”

If you’re a hardworking employee, go on and check your e-mail and work. No one is stopping you. The agreement signed by the French employers’ federations and labor unions was designed to prevent employers to bug you by sending more work or asking about it. There is no rule that you shouldn’t stop being a good employee. It’s your choice. The ban is from your employer’s end. In other words, they can’t force you if you don’t want to do it.

You can disconnect from your work. You should. No one is pressuring you. Internet may have made our jobs easier, as we can work anytime and anywhere, it’s also right that you rest. There is time for work and time for play, as well as, time for rest.

While others think there is no escaping their employers, you can. That is, if you are in France. Jealous much? Move to France. But really, there are people who like to work hard even when at home. It makes them more productive. I know a lot of people who check their inbox at home so when they get to the office on Monday, the load will be lighter. It doesn’t work for everyone though.

This could be true for some but there are companies like Google who is doing the same thing. Google offices in Ireland ran a program that would collect the smartphones of the employees at the end of the day. Workers shouldn’t work at home. This program resulted to Google employees being more productive and happier according to a BGR report.

Looks like there is a correlation between limiting the number of work hours and productivity in workplaces. It somehow makes sense because when time is limited, people tend to work harder and faster. Agree? What do you think?