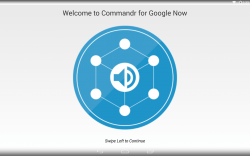 Google Now is fairly useful especially to those who prefer to use voice search instead of type. It’s just that it’s mostly focused on providing you with essential information like the latest weather forecast, street directions, etc. It’s still not fully capable of recognizing voice commands for hardware controls. Fortunately, there’s Commandr.

Commandr is a system enhancement/utility app that can carry out different types of hardware commands via Google Now’s voice command recognition. To be more specific, it intercepts the voice commands that you say to Google Now and automatically uses it to control your device flashlight, music player, GPS, Bluetooth, WiFi and a whole lot more. It can even integrate your voice commands with Tasker. 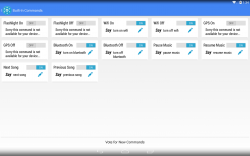 Just think of it like this – if Google Now can deliver you the right pieces of information at the right time, then Commandr can use Google Now to take control of the hardware aspects of your device. In short, it can make Google Now even more powerful and efficient.

Keep in mind that Commandr is still a work in progress so there’s not much that it can do with its current version. Even so, it is currently working on new commands and you can even vote for the ones that you want to be added in the app’s future releases.

Anyways, the way how Commandr works is quite simple. After you launch it, you will be greeted by a brief introduction as to how the app works. After which, you will be taken to the app’s main screen. In order for the app to work, make sure that the option for “Enable interception” is being marked as checked. Thereafter, you can view the app’s built-in commands and try to familiarize everything that’s listed there. Say for example, if you want to turn on your device Bluetooth, just say “turn on Bluetooth” or “Bluetooth on”.

All in all, I can say that Commandr is a very promising app. It’s also very stable and responsive and so far, I haven’t encountered any serious issues while using it. It’s just that it could’ve been much better if it would add more commands without being overly dependent on third-party automation apps like Tasker. I also find it a bit bothersome to always say “Note to self” just to turn on my device Bluetooth when I can easily switch it on via the notification drawer. Although the app clearly mentioned that such option is required, it would be great if it could find a workaround which doesn’t require such lengthy voice commands.

If you want to give Google Now a functionality boost, I highly recommend that you use Commandr. If you already have Tasker, then the more reason that you should give this app a test run. It’s really worth checking out especially if you are the type of Android user who continues to strive for a more convenient hands-free experience.

Requires: Android 4.1 and up