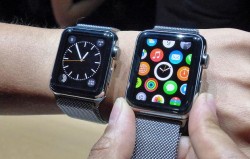 If you are still debating whether to buy the Apple Watch or not, hopefully tutorials such as this twist your arm and take away any of the hassle that you might associate with getting to know a new device. Four of the most basic functions you’ll need to know after buying the Apple smartwatch include powering it on, waking it up, unlocking and locking. Today I’ll walk you through each of the four Apple Watch options right after the jump.

HOW TO WAKE, LOCK, UNLOCK OR POWER ON THE APPLE WATCH