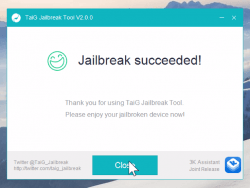 If you are searching the web for the official iOS 8.3 jailbreak, then look no further. The team from TaiG have just released TaiG 2.0 which is compatible with iOS 8.3 and is fully untethered. Moreover, the same tool works for users running iOS 8.2 and iOS 8.1.3. The great news doesn’t stop there either. Since the official iOS 8.4 software update is due to release in less than a week from now on the 30th of June, it seems the jailbreak team have officially given Apple a taste of their own medicine. It’s unlikely Apple developers can work on patching the current exploit TaiG used for this jailbreak in time for the iOS 8.4 release which means that you can probably update to iOS 8.4 and still jailbreak that too. As usual, you’ll still lose the untethered jailbreak by installing the iOS 8.4 software update, but you should be able to install it again the same way you are jailbreaking iOS 8.3 with a Windows PC or Mac running the Windows 10 virtual assistants.