Microsoft often gets a bad wrap for having an abundance of viruses ready to ruin your day at any wrong click. In essence, most other operating systems would have a hard time creating a safer environment if they were to have as many users as Windows does. In addition to that, the Redmond company does a darn good job of rolling out regular security updates to help users out as soon as they can. You might be familiar with the term “Patch Tuesday” which gets it’s name from Microsoft rollouts which would happen on regular Tuesdays. 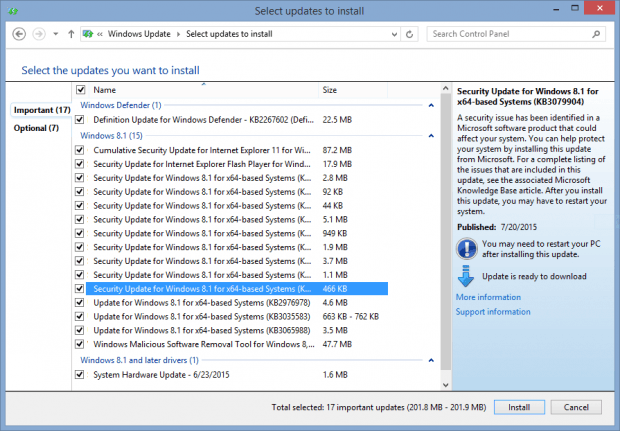 While on the topic of security updates, Microsoft has released a new ‘critical’ patch available for Windows users with Windows Vista and up to install. The file’s made public and available for all to download and install before it’s official automatic rollout that will happen. Here’s the release notes from Microsoft:

This security update resolves a vulnerability in Windows that could allow remote code execution if a user opens a specially crafted document or goes to an untrusted web page that contains embedded OpenType fonts. To learn more about the vulnerability, see Microsoft Security Bulletin MS15-078.

Users who want to know if they need to update the security can check the official Microsoft support page and check if their version of Windows is on the page. Once you’ve checked the page, launch the Windows Update tool from your PC and click the “check for updates” button. Make sure you download the update with number KB3079904 like shown in the screenshot.

Microsoft is calling this update with it’s highest security warning with ‘critical’. We recommend taking the time to check for the download and not waiting if you run one of the infected operating systems.