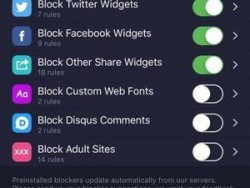 Most people think the war on advertisements in the latest iOS 9 release is about giving people more choice over their online browsing — it isn’t. Behind the scenes there is a tech. war going on between Apple and Google in Silicon Valley. Google is a company that make roughly 90% of their revenue from advertisements; they run the Google Adsense advertisement network and those ads are likely running on this page when you are reading this post. If it wasn’t for the revenue coming directly from Google’s Adsense ad network, many websites wouldn’t survive. Adsense is by far and away the ad network websites want to be apart of, and Adsense is the one company that has a large stranglehold on the online advertising industry. Publishers are fine with that. The ads never come with viruses, since Google can afford to have the best security, and they pay the most out of all the ad networks — the two main issues publishers care about for their readers and themselves.

As most of you will know, Apple and Google are bitter rivals. If you were to ask Apple’s CEO, Tim Cook, who Apple’s main competition in this world is at the moment the one name he would mention is Google. However, unlike Google, Apple doesn’t have an advertising network. They just make the devices. So if Apple wanted to hurt Google what would it do? The obvious answer would be to take away some of that advertising revenue they have been getting all these years.

While we will likely never get that in writing from any head honcho out of Cupertino and the fruit company’s office, you can be rest assured it’s what’s happening. Regular web surfers don’t really care about all that stuff, though. They just want content, and they want it fast. If you do care about the way the World Wide Web works, you might want to think twice before blocking advertisements. It is usually the only way a site is making money after all, and it’s usually not nearly as much money as you might think. On an average day, your view is worth around 0.30 of a cent. As you can see your daily views aren’t exactly making a huge amount of cash alone without the help from many, many others.

My views are different from the average person’s. You see, I actually don’t mind ads. In fact, I think websites tend to look a bit boring without them. I don’t mind the graphical content of a banner ad, I look at it as more of an extra picture on a page that just so happens to move around a bit in advanced tech. kind of a way. A way that I like, and probably more-so than if it were to be completely still.

Why would we be helping people learn how to block ads in iOS 9 if that’s how sites like us make money? If you are that hell-bent on learning how to block the ads, you probably aren’t much good to us with regards to revenue anyway. Most times I’m browsing the web and I see someone who despises advertisements on web pages, they aren’t typically the people who have an interest in clicking on them. Moreover, if it weren’t for the clicks, that figure of 0.30 of a cent takes a dramatic plunge.

So, if you aren’t clicking and you definitely want those ads blocked, we are here to help. We are a website that offers as much help as we can for your technology-based queries after all. Here’s how to block ads on iOS 9 software.

HOW TO BLOCK ADS ON IOS 9

1. Turn on your device that’s running iOS 9 software.
– if you don’t have the iOS 9 software update yet, you can learn how to download iOS 9 final IPSW for iPhone, iPad and iPod touch devices.

2. Open the App Store app from your device’s homescreen.

3. Browse for one of the following app names:
– Blockr
– Hide & Seek
– Purify
– Peace
– AdBlock Plus

4. Confirm you wish to install the app and wait for it to finish downloading to your device.

5. You’ll see a progress bar over the app icon while it’s downloading. Click it once it’s done and open the app to reveal the options inside to set your preferences.

All done. You have now learnt how to block ads on iOS 9. Hopefully you found the right app that works well for you.