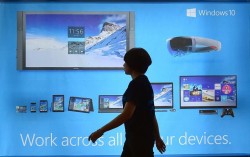 Some people are wondering why the desktop gadgets are not working in Windows 10. Those of you running Windows 7 or Windows 8 operating systems now will know desktop gadgets. The gadgets were first introduced in Windows Vista and have now stopped in Windows 10. Those deeply depressed about the desktop gadgets gone might find some solace in knowing that they were rarely used and hence why they are now discontinued. The minority of you wishing they were still around can head over to the Windows App Store and download third-party apps to replace those gadgets and widgets on your Windows 10 desktop environment.

Though my memory is hazy, I do know I had received some questions regarding the floppy drive and Windows 10. Frankly, I wasn’t aware of a floppy drive still existing, but apparently they were still used. ‘Were’ is now the appropriate term for them, as Microsoft is no longer offering floppy drive support by default. You can, however, head over to the Windows Update or manufacturers website and install the drivers. Those with issues regarding floppy drives will likely find it’s a driver contention.

Windows 10 does not support DVD playback. You could play a DVD via Windows Media Center in the past. That entitlement you had during earlier versions is now gone and you must install third-party apps to help you play DVDs instead. There are free and open source options out there for your DVDs to play without you burning a subscription fee, such as the VLC media Player. You can read more about that here: how to play movies in Windows 10 free.

You might remember Minesweeper — not to be confused with Minecraft — and other native games like Solitaire and Hearts that were always a pleasant way to bide one’s time when you have a few minutes. You will continue the fun times in Windows 10 with the same games, but Microsoft had re-branded the names to  ‘Microsoft Solitaire Collection’ and ‘Microsoft Minesweeper’.