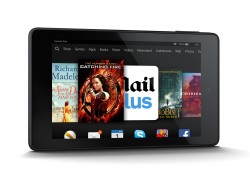 The Amazon Fire HD 6 is a cheap buy for anyone looking at a new tablet. Most people didn’t want anything to do with the Fire Phone’s despite the excellent value for money because they came with a unique FireOS. The Kindle Fire table series comes with the same Fire OS, though many are more inclined but the tablets. The main problem with the Fire OS is that it doesn’t allow people to install all the usual apps from the Google Play Store like a usual Android operating system would. I’m sure nobody needs a reminder on how large a role apps play in deciding what device people will buy. Just look at the struggles Microsoft had with creating successful Windows phone that most people wouldn’t buy because the Microsoft App Store is nothing compared to the range people can find from the Google Play Store or the Apple App Store.

So, what’s the solution to this problem? If you are tech-savvy enough, you can find guides on the internet that can give you an unofficial workaround method for installing things like the Google Play Store over the Fire OS, but it’s not easy. The other choice you have is to root Amazon Fire HD 6 and run all those extra apps.

HOW TO ROOT THE AMAZON KINDLE FIRE HD 6