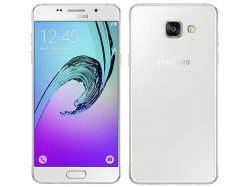 The root user account is tucked away in Android without you ever being aware of it unless you have heard about this little thing called root access. By rooting Android and getting root access to your device you are getting in control of that root user account. The root user is a familiar name in Linux operating systems which are what Android is based on, but if you are not familiar with Linux, then you might not have heard of it before. The root user is similar to the administrator on a Windows computer. It is the admin account that gets the chance to install anything they want and uninstall certain programs too. That is what you need if you are to uninstall any of the system apps on your device or if you are to install any of the several thousand useful root apps available from Google Play.

The following guide is made for the Samsung Galaxy A5 2016 SM-A510K smartphone running on Android 6.0.1 Marshmallow by flashing Chainfire’s one-click rooting tool that allows you to begin installing root apps.

In conclusion, that is how to root Samsung Galaxy A5 2016 SM-A510K on Android 6.0.1 Marshmallow software updates by flashing the appropriate version of the CF-Auto-Root tool.