Firefox 4. It’s finally here.  If you’ve been wanting to see more from your browser, you’ve got no more time to waste, because Mozilla has been working non-stop for the last year for today.  What’s new in Firefox 4?  Where to start? From new locations for the user interface to the little things, Firefox 4 is a completely new step in the right direction.

The Firefox interface in 4.0 has been completely redesigned.  The traditional menu that takes up an entire row has been collapsed down to a single, small button that takes up barely any space at all.  When “restored” (not maximized), the button is on a row by itself, but when maximized, it slides in with the tabs, which have been placed on top of the navigation bar:

When you open the Firefox menu, it presents you with two cleanly organized lists of all the actions you can do.  Want to open a new tab? Done. Want to enter Private Browsing? Done. Want to copy, cut, or paste? Done.  With the new menu, it’s just that simple: Press Ctrl+Shift+E or the little four-paned button in the top-right corner. What do you see?  For me, it’s something like this: 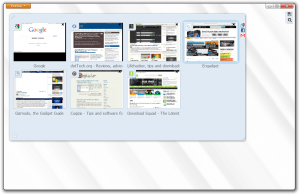 As you can tell, there are lots of different sites I’m visiting right now.  How can I better organize these tabs?  It’s surprisingly simple: just drag and drop them into groups: You can even name these groups. When you open one of these groups, all of your other, unrelated tabs are hidden from view.  This is a great way to ease yourself from distractions and focus on whatever you’re supposed to be doing.

Firefox Sync, first offered as an experimental addon for Firefox 3.x, has spread to all devices and platforms Firefox runs on.  It allows you to view your history, your passwords, your bookmarks, and even your open tabs on your iOS, Android, Windows, OS X, or Linux Firefox installation.

To set up Sync, just go to Firefox>Options>Sync. JägerMonkey: making your Fox fast as a Monkey

Nothing says fast like a… monkey?  Building on the original javascript engine SpiderMonkey, JägerMonkey is much faster and even more fun than Firefox 3.x’s TraceMonkey.  In Mozilla’s tests, Firefox 4.x out-performed previous releases by almost 300-500%!

The little things: adding up

However, there are many more things to a good user experience than just a new user interface and a couple unique features.  There are little things too.

Switch to Tab: One such little thing is Switch to Tab.  With this, you can quickly switch between tabs by typing their name into the navigation bar:

App tabs: If you’ve been using any other modern browser like Chrome or Opera, you’ll be used to these.  These let you make your tabs favicon sized:

As you can see, one of these tabs was lighter than the others.  This means that there is a new notification on that page.  These notifications include, but are not limited to, Facebook chats/messages/notifications, Gmail chats/notifications, and new Google Reader items.

A new Addons Manager: If you go to Firefox>Add-ons, you’ll be greeted with a new, full-page addons manager: Better HTML5 video support: Although Firefox 3.x technically supported HTML5 videos, it only supported one of the major three codecs.  These are h264, WebM, and Ogg Theora.  Of those three, h264 is the most widely implemented, WebM is expected to catch on any day now, and Ogg is seldom used outside of Mozilla.com and Wikipedia.org.  However, now Firefox supports both WebM and Ogg Theora, enabling it to watch YouTube videos with nary a plugin installed.

Although Firefox 4 still isn’t the fastest of browsers (hello Chrome), it’s another great upgrade to what has been the world’s second-most-used browser for quite some time, and is looking better than ever.