Wondershare MP4 Video Converter is a powerful Video to MP4 Converter that can convert various video formats including both standard and high definition videos formats to MP4, M4V and AVI video.This MP4 Video Converter supports multiple mobile players such as iPod, iPhone, PSP, Zune, BlackBerry, Walkman and Apple TV with excellent playback quality. It also provides you with flexible video editing options allowing you to get your ideal output video.

{rw_score}
{for=”Ease of Use” value=”10″}Point and click.
{/for}
{for=”Performance” value=”10″}Quick, good quality, and not too big of a hog on computer resources.
{/for}
{for=”Usefulness” value=”6″}Eh. Being mainly a MP4 video converter, the usefulness of this program is very limited; however being able to output as AVI and M4V helps.
{/for}
{for=”Arbitrary Equalizer” value=”7″}This category reflects an arbitrary number that does not specifically stand for anything. Rather this number is used to reflect my overall rating/verdict of the program in which I considered all the features and free alternatives.
{/for}
{/rw_score} –>

Wondershare MP4 Video Converter is a really nice MP4 converter. It supports many input formats, can output as MP4, M4V, and AVI, has many output “profiles”, can rip audio from video, can edit videos before converting, and can merge videos together. In addition, you can do basic audio files conversions. All this with an aesthetically pleasing, yet easy to use GUI, and fair use of computer resources.

This is what Wondershare MP4 Video Converter looks like: When you first run Wondershare MP4 Video Converter (WMVC) directions on how to use it are written right on the program: 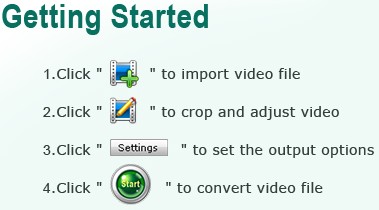 Fairly straightforward and generic; all video converters basically work this way. One thing to note is that WMVC also supports drag + drop so in addition to being able to add your video file by pressing the “Add…” button you can drag + drop your videos into WMVC.

There are all the video/audio files that are supported as inputs: 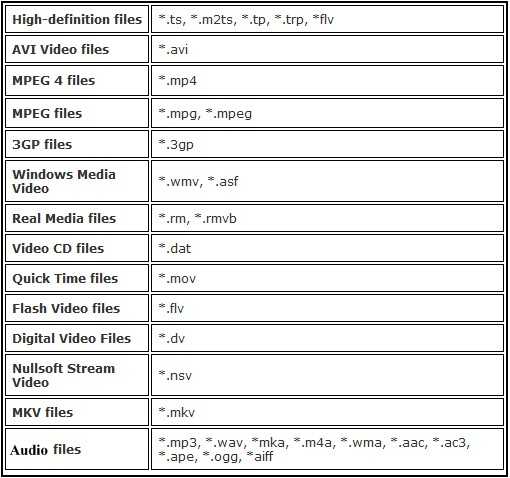 These are all the video/audio output formats/profiles you can choose from: Keep in mind that all of the output selections you see above are not output formats – many of them are just profiles for gadgets such as a Blackberry or PSP. In other words if you have an PSP and you select one of the PSP profiles, PSP Video MPEG-4(*.mp4),, the output format of your video will still be .MP4; the difference between a “Common Video” .MP4 selection and a PSP .MP4 selection is the settings of the output video will be optimized for your PSP. You can always optimize the settings manually but having predefined profiles is convenient. Also:

One really nice feature of WMVC is that you can do some edits to your videos before you convert them. You can crop, trim, add a watermark, edit the brightness, contrast, saturation, or flip (vertically/horizontally). The editing is done in a window with two preview windows side by side (one of the video as it is and one of the video with the changes you make) so it is very easy to compare and see how the video looks before you make your edits and how it will look after: 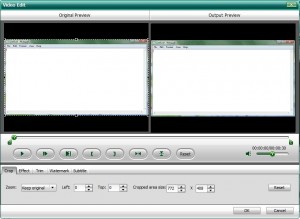 Keep in mind that each video will be merged together one right after another in the order that is listed in WMVC. So if you want a particular order of the merged file, be sure to move them up/down respectively. “Format Preset” is just selecting your output format and/or profile.

Okay that is basically the whole program. I will mention the cons of this program before talking about the actual performance:

Okay done with pros, done with cons. Now on to the actual performance.

Sitting idle, WMVC uses ~15 MB of RAM and little to no CPU – not bad. With videos loaded but not playing in the preview window and before conversion, RAM usage doubles to about ~30 MB of RAM but CPU usage has no change; again not bad. During actual conversion CPU usage is ~45-60% and RAM usage is ~50-80 MB (these numbers are general ball park numbers – they will vary depending on what and to what you are converting); this amount of computer resource usage is fairly typical among video converters so again not bad.

Furthermore, conversions are done fairly quickly (took me 28 seconds to convert a 1.09 MB AVI video to MP4 format using H.264 codec) and the quality of the output video is excellent (keep in mind quality and conversion times will vary depending on your settings).

Lastly, as frequent dotTech readers know, my program of choice when it comes to file conversions is always FormatFactory. So whenever a program that converts video, audio or image files appears on GOTD I always like to see how it compares to FormatFactory. I did the same with WMVC. Here is what I came up with:

In addition to performance, FormatFactory has a lot more features (supports more output video formats, converts more audios, image conversions, ripping DVDs, creating ISOs, etc.). However it is not a complete wash. WMVC has video editing features while FormatFactory does not (the only thing FF can do is trim and crop a video and change audio level and add subtitles). Overall as a rule of thumb I find FormatFactory to be better at the actual converting of videos but WVCP has some nice video editing features that FF does not.

So overall I definitely give Wondershare MP4 Video Converter a thumbs up. It is an excellent MP4 converter that is easy to use, converts files well and has nice extra features such video editing.

{rw_verdict2}For being a MP4 converter, Wondershare MP4 Video Converter is excellent so I give it a thumbs up. However, the fact that it is mainly a MP4 converter (with the ability to output as M4V and AVI also) will turn off many (including me). On the other hand, FormatFactory can convert many more different types of videos. Plus FormatFactory is a better video converter (in my opinion) anyway. So my recommendation for today is the same as it has been for every video converter for the past year: grab FormatFactory.
{/rw_verdict2} –>