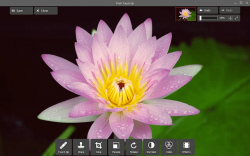 Nowadays, most of the web apps that we use require internet connection. This also applies to those that we use for editing images and photos. Now what if you need to quickly edit a photo but the place that you’re in has no 3G, 4G or Wi-Fi? In such cases, it would be very helpful if you have a simple and easy-to-use web browser app such as Pixlr Touch Up.

Pixlr Touch Up is a free offline photo editor for Google Chrome. You can download this web app via the Chrome Web Store. What this app does is that it lets you edit your photos using its simple photo editing tools and once you’re done, you can easily save your edited photos to your computer. You can also opt to save the photos to your Google Drive online storage. This web browser app works offline so you can use it anytime even if your computer isn’t’t connected to the internet. Pixlr Touch Up is like a spin-off version of Pixlr Express and Pixlr-o-Matic. Just like the other two, it is also a web-based photo editor. However, what makes this web browser app a tad bit different is the fact that it can be used offline. So if ever you are in place where there is no stable internet connectivity, you can still edit and add some finishing touches to your photos.

With Pixlr Touch Up, you can do a bunch of things such as the ones listed below:

Of course, this simple Chrome app may not be as feature-packed as Pixlr Express but it certainly does what it is intended to do. You can use it to quickly apply some finishing touches to your photos. This, of course, could come in handy especially when you do not have any photo editing software installed on your computer.

What I like about this particular Chrome app is the fact that it is very easy to use and it lets you store your edited photos to Google Drive. Aside from this, the web browser app also features the most commonly used tools for editing photos and it also features a total of twenty photo effects. So if ever you have a photo that you need to touch up or edit, just quickly load it on Pixlr Touch Up, apply the finishing touches and that’s it!

So far, I haven’t encountered any serious issues that could affect this app’s functionality and usability. As a matter of fact, it is very responsive and user-friendly. It’s just that it could have been much better if there’s a tool for adding custom text. It would also be great if there’s an option that will allow you to directly share your photos to various social media sites such as Facebook, Twitter, Tumblr and Pinterest. This option could become really useful especially if you want to edit the photos that you want to share online.

All in all, I can say that Pixlr Touch Up is a good photo editor. It’s main feature is its ability to work offline plus it also provides the most commonly used tools and effects for editing photos. So if you want a simple and quick way to apply some finishing touches to your photos, I definitely recommend that you try this free offline photo editor. Just keep in mind that this photo editor can only be used on Google Chrome. It is currently not available on other browsers such as Mozilla Firefox, Safari, Opera and Internet Explorer.