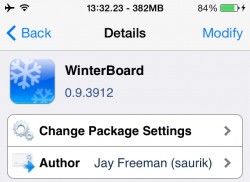 We have some good news for all of you today . Winterboard has been finally updated, thanks to Saurik, to add support for iOS 7 and arm64 (64-bit) devices such as iPhone 5s , iPad Mini with retina display and the new iPad Air . This update also includes bug fixes and improvements that were present on older iOS 7 devices using Winterboard .

While the new update adds support for iOS 7 and arm64 devices , Saurik informs that wallpapers are not supported :

Wallpaper (whether png, html, or any of the other crazy formats that I should never have added to WinterBoard) is not currently supported on iOS 7 :(.

Well what is Winterboard ? Winterboard allows you to apply tons of themes across your device and without winterboard , maybe we would never have themes . While Winterboard has been updated , there aren’t much theme in store for 64-bit devices and we will have to wait for designers to roll out updates and new themes for iOS 7 . However here’s a short list of compatible themes that I’ve tried out and work completely (or partially) on arm64 devices :

Space BlueBerry replaces the stock iOS 7 icons with a much more colorful icons . It provides themed icon for most of the stock applications and includes icons for other third-party apps such as Cydia, WhatsApp, Twitter, Facebook and many more .

Redsgn features rounded icons that adds a minimalistic look to your homescreen . It includes over 110 customized round icons .

If you’re in love with the color black then you will fall in love with 0bscure7 as well . It replaces the stock icons with black icons that looks good on both white and black iPhone .

Oil7 is a unique theme featuring icons that look as if they have been made with oil paint .

These are a few Winterboard themes that I’ve tried out so far and are working properly on my iPhone 5s . Hopefully , you can get started with these themes while we wait for designers to release their themes for iOS 7 and 64-bit devices on Cydia . While winterboard adds support for 64-bit devices , there might still be some bugs that that were left undiscovered during the development process and needs to be fixed . However this update gets most of the job done .