The notoriously addictive 2D-retro style side-scroller – Flappy Bird may be gone, but variations of the game live on. One of the latest, and perhaps the best one so far is Flappy Doge, which replaces the bird with a doge. The best part about Flappy Doge, is that is is just as challenging, and addictive as the original.

The original Flappy Bird game gained viral popularity over the past couple of weeks, so much so that it was said to be making as much as $50,000 a day just from ads. The creator of the game, Vietnamese developer Dong Nguyen , finally decided to pull the game off the iOS App Store as well as the Android Play Store, stating that he couldn’t handle the amount of success this simple game had made for him. The departure of this silly, but addictive little game has given rise to various spinoffs, including fake Flappy Bird versions! 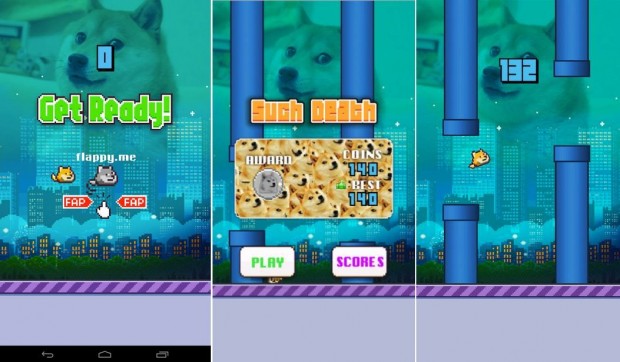 That being said, Flappy Doge is most certainly not a fake Flappy Bird game with malware hidden in it. It is a pretty good replacement though, and is available for free at the Android Play Store. Flappy Doge has been developed by XDA Forum Member holabola. The game is a modded version of the original, with the bird being replaced by an 8-bit version of the dog meme. The objective and gameplay remains exactly the same as the original.

The developer is open to suggestions on improvements or changes which can make this super-addictive game even more fun. Flappy Doge is ad-free and is available as a free download on the Google Play Store. If you missed out on Flappy Bird, this is an excellent alternative.