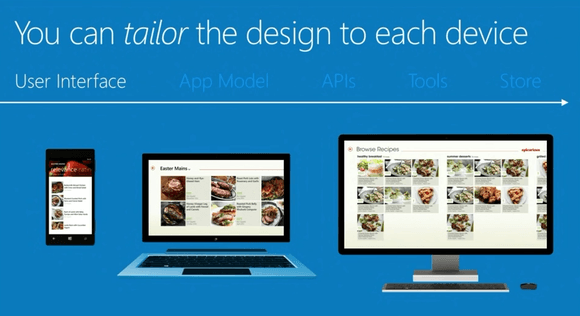 Microsoft made a number of announcements during its presentation at Build, such as new features for both Windows 8.1, Windows Phone 8.1 and even the impending return of the Start Menu. But the most impressive and most exciting announcement is universal apps. A universal app on Apple’s iOS means that it’ll work on both iPhone and iPad, will be tailored for each device, and you only have to buy it once. Microsoft’s universal apps will be compatible on your phone, your tablet, your PC and on the Xbox One.

The announcement is a little surprising since rumors of a feature like this pegged its arrival with Windows 9. But Microsoft has announced it alongside Windows 8.1, and the company says it should be easy for developers to implement since most of the code can be reused across all the different platforms — the payoff for implementing a similar kernel a couple of years back.

For users, it’ll make thing easier, and more convenient as well. A universal app means that syncing should work more seamlessly across devices, and you’ll only have to buy the app once if the developer decides to price it that way. Microsoft is leaving it up to developers to decide if a single purchase includes all versions of the app or if separate purchases are required.

Each version of the app will be tailored to its platform’s interface, such as the touchscreen on tablets and phones, the mouse and keyboard on desktops and the controller and Kinect on the Xbox One. It’s an exciting prospect for Microsoft, developers and users. Hopefully we’ll see universal apps pop up sooner rather than later.