FileBox eXtender is a handy app which adds increased functionality to Windows Explorer. Users can access their favorite folder locations, hide windows out of the way and force a window of their choice to ‘stay on top’ with this program.

FileBox eXtender ran fine on my copy of Windows 7. I did not see any information on the developer’s website on its compatibility with other versions of Windows.

HOW TO SETUP FILEBOX EXTENDER

Download the program from here, run the .exe file and begin enjoying this tweak!

After installing Filebox eXtender, you will notice a few new icons in Windows Explorer’s menu bar( see screenshot below ). The ‘clock’ icon furthest to the left of the additional icons due to FileBox eXtender displays recently opened folders, allowing users to easily access them.

The button to the right of that one which resembles a little heart displays user defined favorite folders when clicked.

The upward arrow icon rolls up the respective Windows Explorer window. The 2 screenshots below illustrate before and after the ‘rolling up’ process. 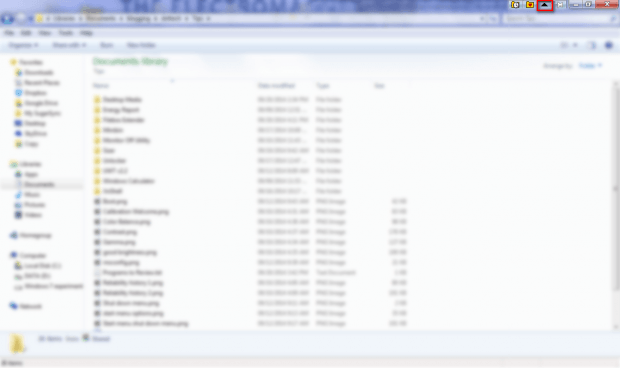 As you can see, using the ‘roll-up’ features just leaves behind the topmost part of the window.

There is also the ‘always on top’ feature which can be accessed from this group of icons. It can be accessed by pressing the icon which resembles a paper clip and its functionality is self explanatory.

Right-clicking on the FileBox eXtender icon in the system tray allows users to set their favorites as well as customize other aspects of the program such as setting hotkeys which will open FileBox eXtender menus.

FileBox eXtender by no means offers users revolutionary features. What it does do however is make your life easier by making some commonly used functions readily available and we couldn’t ask for more.