Google Search supports a wide range of voice commands. You can open apps, play music, get directions, view a map, set alarms and reminders and a whole lot more. It’s a great feature especially if you want a “hands-free” way to control your device.

Speaking of which, Google Search has recently added two new tricks that will definitely capture your interest. All you need is to say the magic phrases and you’ll be able to flip a coin or roll a die.

Flipping a coin in Google Search

Are you trying to do a bet yet, you don’t have any coin in your pocket? Well, that’s not a problem at all. Just take out your phone or tablet then open Google Search. After which, just say “flip a coin” and you’ll instantly get a flipped coin result in either heads or tails. 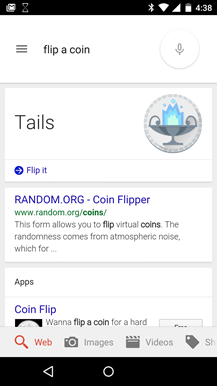 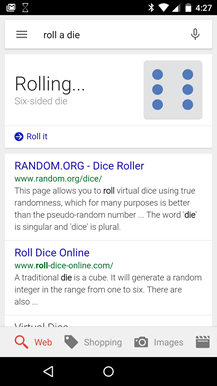 With this feature, you no longer need to get a real die just to play a game of Snakes and Ladders.

Guess what? The said feature also works on Google Search for Web (desktop). So go ahead and give it a try. Let us know if it works.