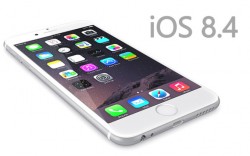 Just as we predicted yesterday, iOS 8.4 is now out as the final version and ready to install on iPhone, iPad and iPod touch devices around the world. You will get the official software update notification arriving automatically OTA, but those who wish to install the final IPSW file manually can do that easily by finding the right link for their devices below.

The major release this year will be the next iOS 9 coming when the fruit company launches the next iPhone. That said, iOS 8.4 is still a great release and comes with heaps of new features. You probably already know about the Apple Music that launched earlier today. The new software update comes with support for the Apple Music so you can become an Apple Music member. There are reportedly already a few million songs available. The iOS 4 software allows you to download the songs and keep them for playback later when you are offline. There’s a bevy of other features too, including iBooks improvements, general bug fixes and enhancements, plus heaps of features associated with Apple Music.

Those of you who jailbreak iOS software will be pleased to learn that TaiG has updated and still uses the exploit found in iOS 8.3 to jailbreak thenew iOS 8.4 release. That means you can follow our untethered jailbreak ioS 8.4 with TaiG guide for Windows and Mac to start using Cydia.