Forget your Windows password?  Yes? How are you going to log in! If you don’t know your password, it can really take away from that whole “using of the computer” idea. Thankfully, a bunch of Swiss developers have put together Ophcrack, a free and open source program that will crack the password on your Windows XP, Vista, or Win7 account.

Image Credit: One and Two –> Unfortunately, I forgot the password to the “passworded account”. Luckily, using Ophcrack gives me a way to crack the password: Boot off the LiveCD, run Ophcrack, and wait a few minutes for Ophcrack to work its magic. For those who don’t know, a “LiveCD” is a disc that contains a bootable operating system. LiveCDs are more known in the Linux circle than the Windows gang because most, if not all, Linux distros have some sort of LiveCD. In fact the LiveCD of Ophcrack – the program that will crack your Windows password – runs on Linux. How’s that for poetic justice?

That said, in order to use Ophcrack on LiveCD you first need to download the correct LiveCD. There is the “ophcrack XP LiveCD” for Windows 2000/XP/Server 2003 and the “ophcrack Vista LiveCD” for Windows Vista/Server 2008/Win7. After downloading the correct LiveCD, you need burn it to a disc; the LiveCD is small enough to fit on a CD, so you don’t need another bigger like a DVD. To burn the image you can use your operating system’s built in image burner (if you are on Windows 7, Linux, or OS X) or you can use a program like ImgBurn or Ashampoo Burning Studio 2010 Advanced.

Once you have burned the image to a disc, you need to pop the disc into the computer that holds the account that you want to crack (say that ten times fast); then you need to boot off the disc. For some booting off the disc is as simple as restarting your computer with the disc in your drive; for others it may require you to tap an F key (like F10 or F12) during the BIOS screen and manually tell the computer you want to boot off the disc; yet for others you may need to enable to booting off disc from your BIOS before you can do any of the previously mentioned actions.

Booting into the Ophcrack LiveCD will take literally seconds. If you see something like the following, you know you are headed in the right direction:

Once you’ve gotten past that first screen – it should only take a second – you’ll be prompted to choose between four modes:

Unless you have a specific reason to pick a different one, picking automatic graphics mode is fine because automatically that allows Ophcrack to pick the best resolution settings for you. Once you pick a mode, you will be booted into Ophcrack! 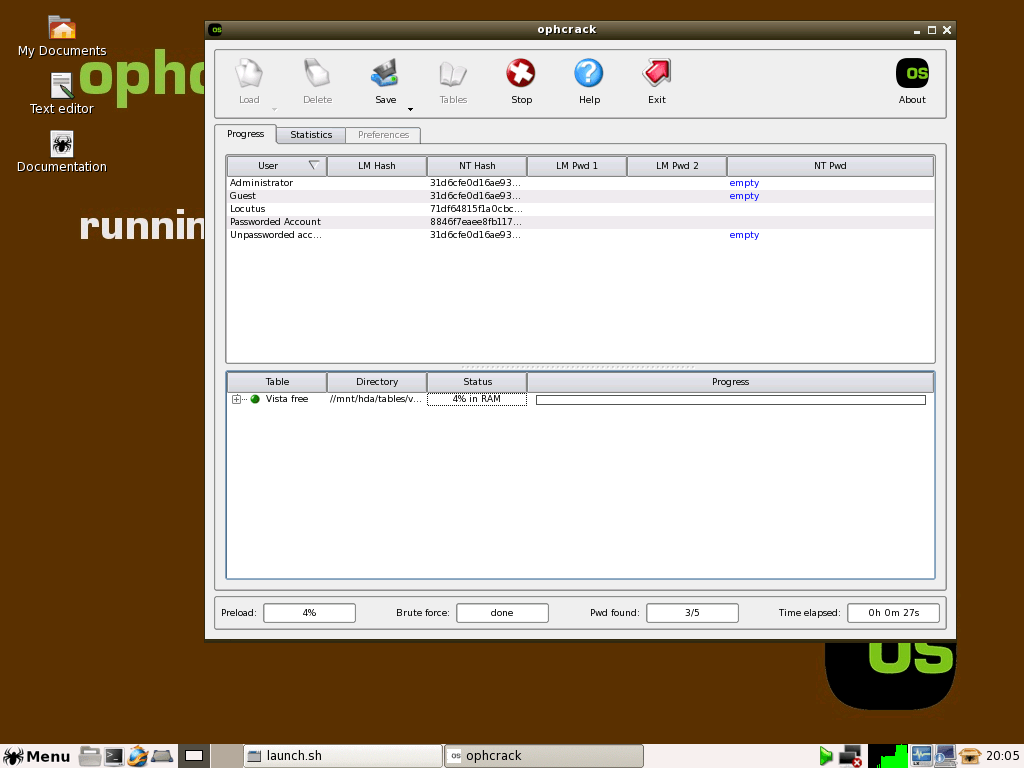 For me the rainbow tables were 79% loaded into RAM after ~2 minutes: After the tables are loaded into your RAM, Ophcrack will start cracking using the rainbow tables: Depending on the strength of your passwords, it can take a couple minutes to crack. (If you have a particularly nasty to crack password, the makers of Ophcrack were kind enough to include a little Sudoku game you can play while waiting. You can find it in the menu.) For my “passworded” account, the password was relatively easy to crack: As you can see in the above screenshot, as Ophcrack finds passwords it lists the passwords next to their respective accounts. Write down the passwords once Ophcrack finds them for you so you can boot into your account. Or, you can memorize them, but if you had such a good memory in the first place you probably wouldn’t have forgot the password. :-P

Once the passwords you want are cracked, you just need to reboot your computer to get out of Ophcrack. (You may also have to take out the CD from the disc drive, depending on your computer.)

Last but not least, take note that Ophcrack cannot crack all passwords. Ophcrack will only crack passwords that are 14 characters or less in length, because Ophcrack takes advantage of a permanent flaw in Microsoft’s method of securing passwords; and if you have an extremely complex password you may find Ophcrack throw up its arms in defeat. However, all things considered, Ophcrack is an excellent tool that can help you when you find yourself between a rock and a hard place.

Supported OS: Windows installer version works on Windows 2000, XP, Vista, and Win7; the LiveCD is OS-independent but will only crack the passwords for the OSes previously mentioned.