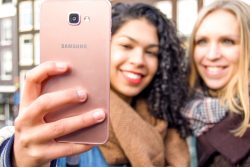 The Android operating system has the same root user account only Android does not give it to you by default. They block it off by default and have chosen to go down the route of not letting you have it. Just because Android chose to take it away from you doesn’t mean that it doesn’t exist in the Linux kernel and it doesn’t mean there is any way to gain control of it either.

You can get in control of the root user account on the Samsung Galaxy A9 SM-A9000 smartphone by using Chainfire’s one-click rooting method. Instead of logging in as the root user like you do from most Linux distributions, the CF-Auto-Root tool enabled SuperSU on the smartphone. The SuperSU then chooses to grant the root permission to the apps that you want to have root after you install them. The rest of the time the SuperSU blocks the root access from the other apps you install or from apps that don’t demand it before they will run. You can also manage what apps you have chosen into grant root access after the fact of originally granting them the rooting permissions, so no choice you make needs to be a permanent one.

HOW TO ROOT SAMSUNG GALAXY A9 SM-A900 RUNNING ANDROID 6.0.1 MARSHMALLOW WITH CF-AUTO-ROOT

In conclusion, that is how to root Samsung Galaxy A9 SM-A9000 smartphones running on Android 6.0.1 Marshmallow software updates with the CF-Auto-Root tool by Chainfire. The SuperSU is now enabled, and you can see it as a regular application on your smartphone when it reboots. You don’t need to do anything from the app before you can begin installing the root apps that you wanted to try.