Boxoft Screen OCR is fast and easy-to-use software which helps to extract any area on your screen, recognize every character and then save as TXT file. The smart tool enables you to select text from anywhere on the screen, including areas that you cannot highlight with your mouse, such as dialog boxes, protected Web pages, PDF files, error messages and so on

{rw_score}
{for=”Ease of Use” value=”6″}The program itself is not too complicated to use: You take a screenshot, OCR it, and save the OCR’ed text. However, I find that only being able to OCR via screen captures to be very annoying; plus there is a lack of diversity in the types of tools that can be used to screen capture.
{/for}
{for=”Performance” value=”7″}Works surprisingly well for a $27 OCR program; and it supports languages other than English, although I was only able to test it on English. However it isn’t perfect and don’t expect it to go toe-to-toe with more expensive OCR packages; in particular I noticed it has trouble with handwritten words/handwriting-like fonts.
{/for}
{for=”Usefulness” value=”6″}Although I am sure many people could appreciate good OCR, being able to only OCR via screen captures will deter a lot of potential interested customers.
{/for}
{for=”Price” value=”9″}Considering how expensive OCR software can be, asking $27 is really very low.
{/for}
{for=”Final Score” value=”7″}
{/for}
{/rw_score} –> Now the Boxoft Toolbox itself isn’t that bad of a program; it isn’t malicious or anything like that as far as I can tell. It basically just lists out all the developer’s products; heck I found Boxoft Free OCR by using it. However, I deplore how the developer installs it without asking the user and makes it automatically start at Windows boot.

While I couldn’t find Boxoft Toolbox under Add/Remove Programs to uninstall, I did find you can uninstall it by running Uninstall.exe in C:/ProgramData/Boxtools (C:/Documents and Settings/%username%/Application Data/Boxtools for Windows XP users)… As the name may imply, Boxoft Screen OCR is an OCR program. (For those that don’t know, OCR stands for optical character recognition; it is a technique that allows for extracting of words out of images.) However, Boxoft Screen OCR isn’t your typical OCR software; it doesn’t allow users to import images/scan files to OCR. Rather, BSO (Boxoft Screen OCR) works using screenshots; users take a screenshot of what they want to OCR and BSO performs an OCR on the content within the screenshot.

This is what BSO’s main program window looks like: Just one clarification about the video: The text selection with the green rectangle as shown in the demo video does not happen automatically – you must manually select the area you want to OCR using a freehand rectangle tool.

As you can see, using BSO isn’t rocket science. So, then, if using BSO is straightforward, how well does it perform? It doesn’t perform as well as other, more expensive OCR packages; but for a $27 OCR program, I was impressed with its performance. 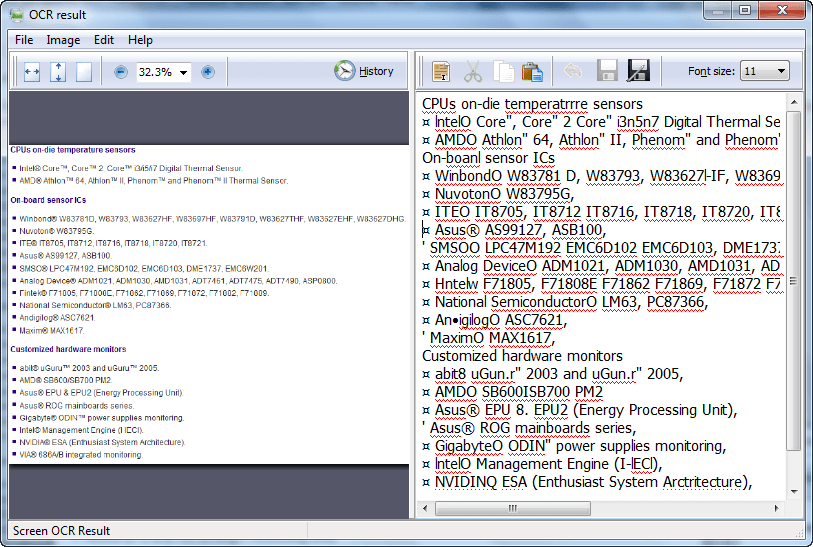 As you can see, BSO is far from perfect; not even close. The less clear the text is, the worse BSO performs; and BSO has trouble with handwritten text/handwriting-like fonts. However, BSO gets the general gist of the content; even for the image of a letter that I took with my phone BSO got most of it (but it did mess up a few words at the beginning of each line). What else can you expect from a $27 OCR program? You get what you pay for and BSO is a handy, cheap OCR solution.

Other things to note about BSO:

Through this OCR History you can easily recall the results of past OCRs you did.

Last but not the least, there are a few areas that I find lacking in BSO:

Boxoft Free OCR is a freeware OCR software offered by the same developer of Boxoft Screen OCR. The main difference, however, is Free OCR works by importing images or scanning in files; Screen OCR works by taking screenshots. I honestly find Free OCR to be the better programing because importing images/scanning in files is more useful than taking screenshots in my opinion, especially if you consider you can always take a screenshot of whatever you want to OCR, save it as an image, and import it into Free OCR. In other words, Free OCR can still be used to OCR on-screen content – it just doesn’t have a screen capturing tool built-in.

{rw_verdict2}For a $27 OCR program, Boxoft Screen OCR performs well. Is it as good as more expensive OCR apps? No. Is it perfect? Not by any stretch of the imagination. But for a cheap OCR solution, it works well. I give it a thumbs up. I stop short of recommending it because I find the screen capture way of doing OCR to be very cumbersome and limited… especially since users can only use a rectangle freehand tool to take those screenshots. If you think you are comfortable with that type of OCR, feel free to grab Boxoft Screen OCR. For everyone else who prefers importing images/scanning in files to do OCR, check out Boxoft Free OCR; it offers the same performance as Screen OCR but operates differently.
{/rw_verdict2} –>