Adblock Plus is the most popular adblocking add-on around. dotTech recommends it and I am sure many dotTechies (including myself) use it. Indeed in the day and age where some websites have more ads than content, Adblock Plus is one of the best add-ons available. So, then, when the latest version of Adblock Plus (v2.0 — it should starting rolling out to Firefox users starting tomorrow and will hit Chrome in the next few months) makes a fundamental change that potentially challenges the core existence of the add-on, Ashraf takes notice.

Okay, okay — enough talking about myself in third person. The point of this article isn’t to stroke my ego but rather to point out the new “acceptable ads” feature in Adblock Plus v2.0.

UPDATE: This article was originally written in December 2011 when ‘Acceptable Ads’ were originally introduced. We have brought this post to the front to help educate people about Adblock Plus’ ‘Acceptable Ads’ and to teach people how to disable it, if desired.

What Are “Acceptable Ads”?

At the moment the developer has three requirements for an ad to be “acceptable”:

The developer also proclaims, to protect user privacy, they would like to make mandatory Do Not Track support for acceptable ads but that isn’t possible, yet.

Take note the criteria listed above is subject to change and is not finalized.

We have agreements with some websites and advertisers that only advertising matching our criteria will be used, their ads will be unblocked then. We hope to grow our list significantly over time.

UPDATE: It is now known that Adblock Plus accepts money from companies and websites (e.g. Google, Microsoft, Yahoo, etc. to be placed on the acceptable ads whitelist while some small websites are put on there for free.

Must I Allow “Acceptable Ads”?

No. The “acceptable ads” feature is enabled by default for new users and users upgrading. However, users can easily opt-out of it.

To opt-out of allowing acceptable ads, go to Adblock Plus’ Filter Preferences… 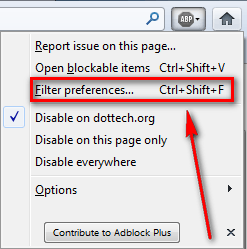 Click the Close button after you have unchecked the Allow non-instrusive advertising option and Adblock Plus will no longer show acceptable ads.

Why Is The Developer Doing this?

This is the developer’s rationale:

Starting with Adblock Plus 2.0 you can allow some of the advertising that is considered not annoying. By doing this you support websites that rely on advertising but choose to do it in a non-intrusive way. And you give these websites an advantage over their competition which encourages other websites to use non-intrusive advertising as well. In the long term the web will become a better place for everybody, not only Adblock Plus users. Without this feature we run the danger that increasing Adblock Plus usage will make small websites unsustainable.

This is why acceptable ads are enabled by default:

[Enabling by default is] unfortunately the only way to reach the goals outlined above. If we ask users to enable this feature then most of them won’t do it — simply because they never change any settings unless absolutely necessary. However, advertisers will only be interested in switching to better ways of advertising if the majority of Adblock Plus users has this feature enabled.

Personally speaking, as a webmaster, I am thrilled about the idea to allow acceptable ads. After all, advertisements are the lifeblood for many websites, including dotTech. I don’t even mind the opt-out nature of acceptable ads because in a twisted kind of way it makes sense that if this feature was opt-in no one would use it and it would essentially be useless. However, I am not so thrilled about the developer’s lack of transparency.

Don’t get me wrong; I don’t mind money exchanging hands when adding websites to the acceptable ads filter as long as the ads being allowed are truly non-intrusive. After all, the developer needs to make a living and the add-on development will continue if the developer can use it to financially support themselves and their family. What irks me is

The concept of acceptable ads can make or break Adblock Plus. If the developer is transparent about it and uses a community-first mindset, I am sure it will further the value of Adblock Plus. However, if the developer uses it to abuse the trust millions of users have put in Adblock Plus, we will simply dump the add-on and move to the next best ad blocker.

Feel free to provide your own feedback regarding this new change to Adblock Plus in the comments below; and hit up the links below to read up on exactly what the developer says about acceptable ads: