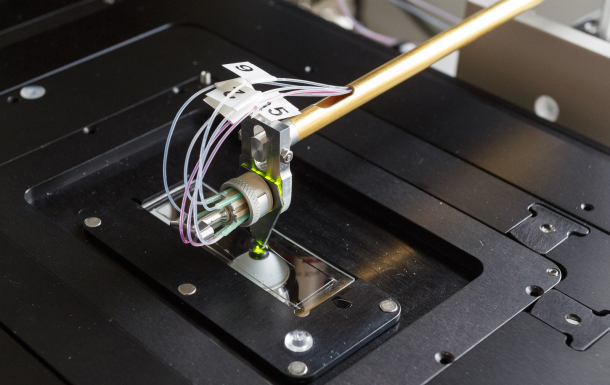 What the guys at IBM are doing is working on a chip that will shrink the area that is used to test on a biopsy. By shrinking the area used to test on a biopsy the doctors can actually conduct more tests on a single biopsied piece of tissue. Traditional biopsy procedures have the chemical markers going over a larger area, meaning not as many tests can be performed.

With the new chip, called microfluidics, the chemical marker will be channeled to the test area. Any excess chemicals are syphoned off in a second channel to keep it from spreading from the test area. The new testing area is only about the diameter of a human hair. For a biopsy sample, that means doctors can test over 500 patches on a sample the size of 1 square centimeter.

As the microfluidics chip is designed now, a pathologist must control it with a joystick, placing the tip on the exact point to test. The chip has several reservoirs that allows the pathologist to change easily between markers for different tests without having to constantly replace the chip. IBM’s hope is that in the future the process will be more automated. The sample can be put into a machine and the results populate without human interaction.

So far, microfluidics is untested but University Hospital Zurich plans to give it trial run in the next few months. Let’s see what happens.