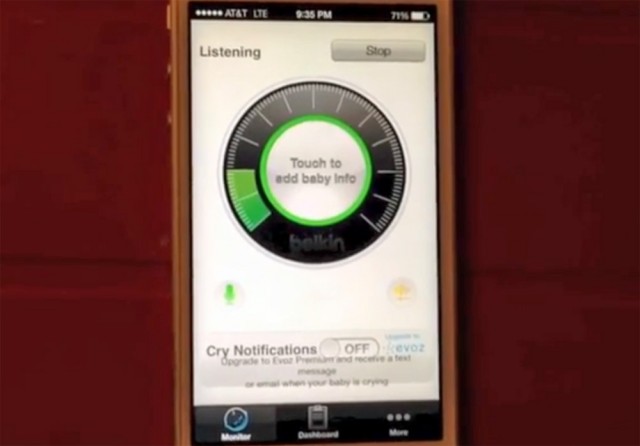 Now there are many in the world who claim that as technology is evil and is separating us more and more in a community sense, despite the fact that for humanity to have gotten anywhere, even the Bronze Age, required the use of some sort of technology. In many cases technology has made the people of the world more connected than ever before and in some ways that is a great thing, but there is always a flip side, because in other ways it has made us more vulnerable. Case in point, the Belkin baby monitor.

It appears that the Belkin baby monitor, which is a WeMo brand, contains the ability to turn it into a bugging device.

The baby monitor is very easy to use. You connect it to the home WiFi once and it can then be accessed through that same network with an iPhone or iPad. Some of the problems right away are that there is no password authentication and the only way to know if the device is locked down is to continually check the monitor’s settings, to make sure that there are no unrecognized devices connected to it.

Nitesh Dhanjani, who is an independent security researcher, states that there is another weakness. He has called attention to one that he believes is more subtle, and that is that the same mechanism which authorizes an iPhone that connects to a WeMo only once can be abused by malware to give pretty much any internet-connected device remote-bugging capabilities.

Belkin support representatives have responded to these claims by stating that their devices aren’t anymore insecure than other devices. “For homes that use a password for their WiFi, our product is as secure as any item on that network,” they said. “For someone to get access to the baby monitor a person would need to discover that password.”

What they don’t seem to be taking into consideration is the fact that there are many people who aren’t exactly tech-savy, and are simply looking for a baby monitor they can easily use without having to worry to much about.