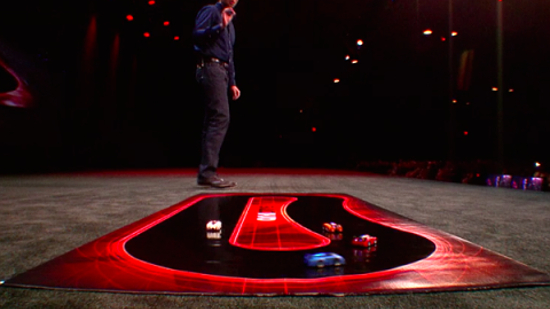 A new robotics team called Anki is seeking to redefine the way we look at video games and bring them into the physical sphere. “We’ve been working to take artificial intelligence out of research labs and build it in consumer products that people can use in their everyday lives,” said Mark Palatucci, co-founder of Anki and Chief Product Officer.

Their first attempt at this is called Anki Drive. The product is $199 for the first kit, and provides the consumer with actual toy cars which are then raced on a track. The cars are controlled by an iPhone, iPod Touch and iPad. The difference with this set, compared to other toy car sets, is that although players can compete against one another, they can also do so against AI opponents programmed into the cars.

“One of the first things we realized,” Palatucci said, “was that video games have taken advantage of every advance in technology over the last three decades, whether it be high-speed graphics, Internet connections, or most recently social and mobile gaming. If you compare that to physical toys or physical games, they really haven’t been touched by technology in the same way. So a lot of what people are playing with today is the same thing that people were playing with in the 1960s and 1970s.”

Despite the immersive qualities that gaming can provide, the team believes that games still do not have the same emotional attachment that toys can create. “People literally fall in love with their teddy bears,” Palatucci said. “The character within the toy creates a really strong bond between the person and the object. Video games don’t necessarily have that to the same extent.”

Though Palatucci seems to be underestimating the emotional attachment a video game can provide, as anyone who has played games such as “The Last of Us” or “Limbo” as well as a plethora of different games in the past ten to fifteen years, he does admit that gaming is incredibly engaging and the team is seeking to “create a new type of entertainment experience.”

Unfortunately for now if you want an Anki Drive you’ll have to be patient, as it is on back order at the moment.