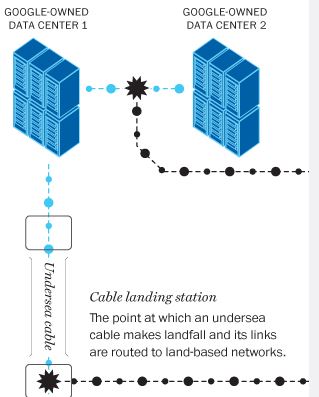 It appears that the NSA’s foothold into the world of digital communication is not just phone taps on cellphones. On the contrary, there is evidence to support the claim that the NSA also has links in Yahoo and Google. Meaning users that use two of the biggest names in the online world may have had their information confiscated… without Google and Yahoo knowledge.

According to information received from former NSA contractor Edward Snowden, the NSA has been in Google and Yahoo data centers since the beginning of 2013. The agency secretly broke into the two companies’ communication links between their data centers and has been pulling data ever since.

While the NSA doesn’t keep everything it collects from these hacks, it does keep a lot of what it takes. That means the privacy of over a million users has been compromised so far.

By using a project called MUSCULAR the NSA was able to go in the back door and obtain over 181,000,000 records — including metadata which says who sent and received emails, when the messages were sent or received, and what the content of the message was. What makes this invasion even more disturbing is that the NSA already had front door access to these companies with PRISM and other spying programs, which have been approved for use by US courts and are legal.

Yahoo and Google have both issued separate statements addressing concerns of the complacency in the act. Both companies voice that the information was taken without permission and that they have controls in place that protect their data centers. It isn’t clear how those controls failed in this case.