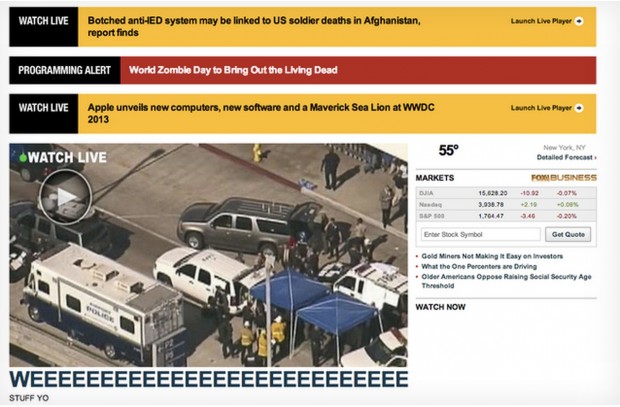 The homepage of Fox News’ website appeared to be temporarily vandalized today. The featured headline was changed to “WEEEEEEEEEEEEEEEEEEEEEEEEEEEE,” followed with the blurb, “STUFF YO.” Other articles that appeared during the time were ones about Apple releasing a Maverick Sea Lion and World Zombie Day.

Despite the growing instances of media outlets being hacked by political activists, Fox News says it was an “internal production problem.” Jeff Misenti, Fox’s chief digital officer, told The Verge that what actually happened was a homepage prototype was accidentally pushed onto the main site:

During routine website maintenance, a homepage prototype was accidentally moved to the actual site. As with any mistake in testing, engineers noticed the error and quickly brought the site back to its normal function.

Fox News’ website has since returned to normal, but that hasn’t stopped many on the internet from saying that nothing changed, and that Fox News has been that way all along. Ha.