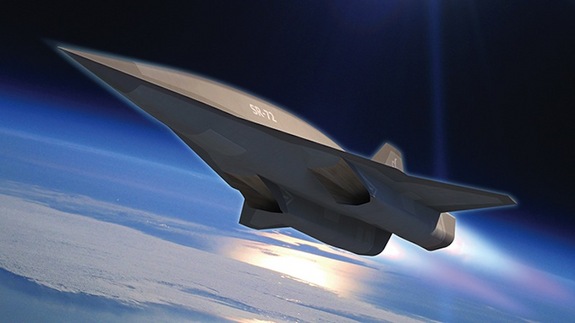 The new plane, called SR-72, will be able to travel at a speed 6 times as fast as the speed of sound, hence hypersonic. It will be the successor to its predecessor, SR-71 Blackbird, also developed by Lockheed Martin and also the fastest plane of the world… until the SR-72 is out. SR-72 will be an unmanned air vehicle, or as such planes are known in U.S by the abbreviation “U.A.V.” SR-72 will be able to cruise the skies 3 times faster than all existing planes in the U.S Air Force arsenal and two times faster than its predecessor, SR-71 Blackbird. In scientific terms, it will be able to reach Mach 6.

The Sr-72 is being programmed in such a way that it will be able to reach any enemy position in an hour, which will not give enemies enough room to change their location. Moreover, Lockheed Martin is producing SR-72 with currently available technology, allowing it to produce a working unit within $1 Billion, given the fact that U.S military, air force and navy are undergoing budget cuts. SR-72 is planned to be inducted in service as early as 2030.

The SR-72 will be nothing like all the military planes that we have seen so far. It will be built upon experience, as Lockheed Martin has quite a history of conducting tests and manufacturing state-of-the-art planes. The infamous U-2 spy plane, which was used for spying in the cold war era, was also developed by Lockheed Martin.