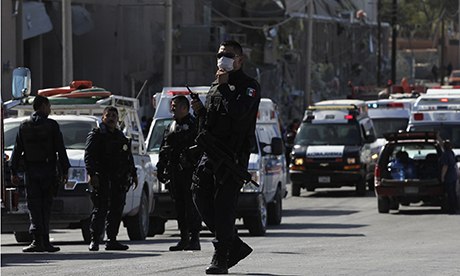 Latin Americans are using social media to help make their lives as safe as possible, in lieu of actually effective police and security forces in their respective countries.

Latin America has a very high crime rate, and a murder rate that is significantly higher than the average for the rest of the world at 29 murders for every 100,000 people. There is a significant amount of distrust for state officials among the people as well. Some because the state isn’t effectual when it comes to properly managing police forces, or others because the people feel that they are in league with the criminals as well.

The use of high-tech has also increased, and with this people have started to use things like Twitter, blogs text services, as examples, to keep the people in their communities as informed as possible. Some data can be unreliable, and there is risk in posting blogs about criminal activity. Bloggers have been killed in the past by criminal organizations for doing so, but at least with social media and high tech devices, the people are given somewhat of a chance.

“The use of big data and social media can allow for the scale, speed and specificity that most traditional approaches [to fighting crime] lack,”Robert Muggah said. Robert is the director for the Igarapé Institute in Rio de Jeneiro. He helps coordinate projects concerned with security there.

“This kind of information, which can provide more precise data on the time of incidents, the places they occur, the perpetrators and victims, and latent trends and correlations, is critical for preventing and reducing violence,” Robert also said.

The people can only do so much though. There has to be a change in priority in Latin America at the government level when it comes to police forces, which is easier written than done since the power held by cartels and crime lords, as well as gangs in slums, is significant.