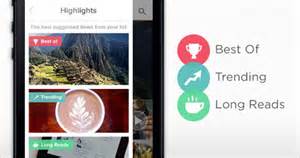 Smartphones and tablets with their apps have made many parts of life quite easy, but avid readers often complained that no such app has been released that caters to their needs. Nate Weiner, the founder of Pocket, has achieved just that.

Pocket, previously known as Read it Later, is an app that monitors its users activities, and saves that information. Based on that information, it knows what content you read and save most, and in turn, it suggests similar content for reading. It has a new feature, called Highlights, that shows the content saved by the user based on the authors the user reads or follows, the user’s interests, and sites visited by the user.

Nate Weiner remarks that the purpose of Highlights is that most users upon saving 100 items of interest don’t usually read items that come after the 30th entry. In order to fix this human error, Pocket 5.0 marks the saved items with colored badges, such as “Best of,” “Long Reads,” “Short Reads,” and “Trending.”

Furthermore, Pocket 5.0 knows what device the user is reading contents on, for which Pocket 5.0 adapts accordingly to that particular device. On cellphones, Pocket 5.0 pops up the “Mobile Highlights” that makes finding of diverse content easier. Moreover, Pocket 5.0 has featured a swipe menu with which users can scroll between Highlights, Videos, Favorites, My List, and Shared to Me. Shared to Me constitutes the content suggested by the user’s contacts on Pocket 5.0. Pocket 5.0 is available now for iOS and on 20th November for Android devices.