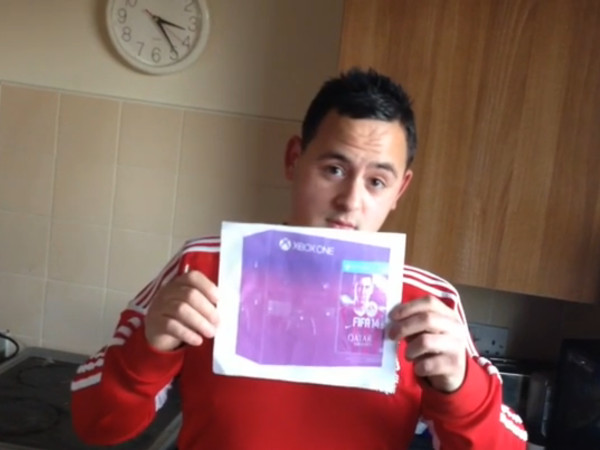 Peter Clatworthy, a 19-year-old who lives in Billborough, which is near Nottingham, UK, spent £450 (roughly US$749.02) on an Xbox One. Or so he thought. Turns out, what he ended up buying was a picture of an Xbox One.

The ad for the Xbox One was posted on eBay and although the ad was a little suspicious, Clatworthy brushed it off anyway because it was still a little cheaper than the rest of the Xbox Ones on there. He also wanted to buy the console for his son, 4-year-old McKenzie.

“It said ‘photo’, and I was in two minds, but I looked at the description, and the fact it was in the right category made me think it was genuine. I looked at the seller’s feedback, and there was nothing negative. I bought it there and then because I thought it was a good deal,” Clatworthy said to the Nottingham Post.

A couple of days later he got the picture in the mail, which had an Xbox One as well as a copy of Fifa 14 on it, with a cheeky note on the back that said “thank you for purchase”. Understandably Clatsworthy was not amused at all.

eBay is currently looking into the scam and also saying that Clatsworthy will get a full refund, though this has to come from the person who put the ad up. “We don’t allow listings which mislead and will take action against this seller,” an eBay rep said.

Hopefully Clatsworthy gets some sort of justice. As for the rest of us, let this be reminder: if it is too good to be true + it is on eBay, it probably is a scam.